An update on some pipeline candidates that received Foundation funding.

The most challenging aspect of therapy development for the eye is advancing a treatment into a clinical trial. Crossing the threshold from the lab into the clinic requires significant investment as well as regulatory expertise, knowledge of good manufacturing processes, and risk tolerance.

In 2018, the Foundation Fighting Blindness launched a venture philanthropy investment arm called the Retinal Degeneration (RD) Fund to help companies and researchers advance promising treatments for inherited retinal diseases (IRDs) into and through early-stage human studies. The targeted IRDs include retinitis pigmentosa (RP), Usher syndrome, and Stargardt disease. As a global leader in driving research for IRD treatments and cures, the nonprofit brings unparalleled scientific expertise and credibility to the projects that it funds.

“The Foundation has been a research-funding leader in the IRD space for nearly 50 years, which is very attractive to potential investors,” Benjamin Yerxa, PhD, chief executive officer at the Foundation, told me in an interview. “Our investment in a project often serves as a seal of approval for our potential partners. We also bring clinical development expertise to the efforts, which is valuable to small R&D teams in start-up companies emerging from academic settings.”

The goal of the RD Fund is to demonstrate early proofs of concept for emerging therapies to attract much larger investments from biotech and pharmaceutical companies for later-stage human studies, which hopefully lead to regulatory approval.

“If through our RD Fund investment we can show safety and evidence of efficacy in a phase 1/2 trial and reduce risk, then large companies are more inclined to take on the development effort and, ultimately, the commercialization process,” Dr. Yerxa said.

Currently, the RD Fund has allocated about 75% of its $72 million fund to eight investments. A few examples are outlined below.

Based in the Netherlands, ProQR develops RNA therapies for rare diseases. The company has three emerging therapies, all of which are antisense oligonucleotides (AONs) in clinical trials for the treatment of IRDs. AONs are small, single-stranded DNA fragments designed to mask or correct mutations in RNA. They are administered via intravitreal injection.

The Foundation is investing $7.5 million in development of the candidate QR-421a, an AON therapy that is being evaluated in the STELLAR trial, a phase 1/2 dose-escalation clinical trial for patients with mutations in exon 13 of the USH2A gene, which can cause Usher syndrome type 2A and nonsyndromic RP. In an interim report on the QR-421a clinical trial, ProQR said that two of eight participants had improvements in functional and structural measures.1

The company also has a phase 2/3 clinical trial under way to evaluate sepofarsen, an AON therapy that targets a mutation (c.2991+1655A>G in Intron 26) in the gene CEP290, which causes Leber congenital amaurosis 10 (LCA 10). In the phase 1/2 clinical trial evaluating sepofarsen, four of six participants demonstrated vision improvements.2

In late 2019, ProQR launched an AON clinical trial for people with RP caused by the P23H mutation in the gene RHO, but no results have been reported.

Based in Fort Worth, Texas, Nacuity Pharmaceuticals is developing an oral antioxidant candidate known as NPI-001, which is designed to slow vision loss in patients with IRDs such as RP and Usher syndrome. In May 2020, the company launched a phase 1/2 clinical trial in Australia to evaluate the safety of NPI-001. Researchers in the study SLO-RP, will enroll at least 48 patients with Usher syndrome and follow them for 2 years. If results for SLO-RP are favorable, Nacuity plans to launch clinical trials in 2021 to evaluate NPI-001 in patients with RP in the United States and Australia.

The Foundation is investing $7.5 million in NPI-001 development and providing scientific consulting for the clinical trial and therapy development. Dr. Yerxa is on Nacuity’s board of directors.

In most patients with RP, vision loss begins in rod cells. As a result, night and peripheral vision are affected first. However, over time, central vision and visual acuity are often affected due to loss of cone cells. Researchers from the Institut de la Vision in Paris identified a protein produced by rod cells that preserves cone cells. Researchers have begun to develop a gene therapy to express this protein, aptly named rod-derived cone viability factor, or RdCVF. The goal of the treatment is to preserve cone cells in patients with RP, Usher syndrome, and other related conditions. This therapy is designed to work independently of the mutated gene that underlies the IRD in question. The company plans to launch a clinical trial of the RdCVF gene therapy in 2021.

The Foundation is investing $7.9 million (€7 million) in development of this gene therapy. 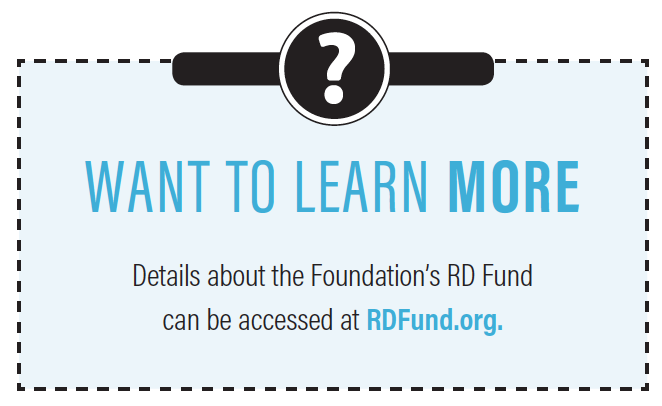 Gel and Genes: Novel Ways to Intervene! A Summary of VBS 2020

Fovea Plana in a 6-Month-Old Infant