A pediatric patient’s blurred vision resulted in a diagnosis of choroidal osteoma.

A 12-year-old boy visited our clinic for sudden, painless blurred vision and metamorphopsia in his left eye (OS) starting 7 days back. His BCVA was 6/60 OS and 6/6 in right eye (OD). Anterior segment examination was unremarkable in each eye. On fundus examination OS, a yellow-white lesion was seen at the macula with a well-defined geographic border and diffuse, mottled depigmentation of the overlying retinal pigment epithelium (RPE). An elevated gray-green area could be seen at the center of the yellow-white area, with subretinal hemorrhage surrounding it (Top Left). The fundus OD was normal.

B-scan ultrasonography showed a slightly elevated, highly reflective choroidal mass with acoustic shadowing of a “pseudo–optic nerve” (Top Right). The mass persisted even at lower gain. A-scan ultrasonography showed a high-intensity spike. Fluorescein angiography showed early patchy hyperfluorescence with late diffuse staining of the lesion, block fluorescence at the hemorrhage, and leakage at the center—suggestive of a choroidal neovascular membrane (CNVM; Bottom Left). OCT showed a subretinal CNVM with fluid exudation; the RPE was not visible due to back-scattering from subretinal blood (Bottom Right). 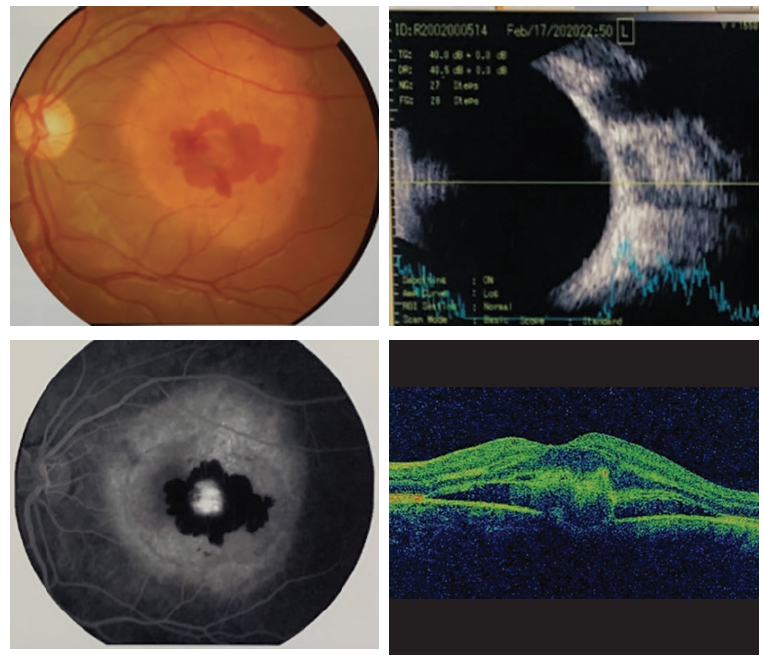 The patient was diagnosed with choroidal osteoma with active CNVM OS. Anti-VEGF injections were advised.

Choroidal osteoma is a benign tumor of the choroid composed of mature bone. It is typically found in healthy young females in the second or third decades of life,1 usually as a juxtapapillary lesion that may extend into the macular region.2 Asymptomatic or stable choroidal osteoma can be observed. Long-term poor visual acuity in patients with choroidal osteoma is associated with subretinal fluid, RPE alterations, and subretinal hemorrhage from CNVM3 and decalcification.4

The case presented here is a rare one, in that choroidal osteoma was found at an early age in a male patient with marked reduction of vision at his first presentation. Only the macula was involved, with all complications presenting in that compact space: CNVM, subretinal and intraretinal hemorrhage, and serous and hemorrhagic retinal detachment.

Recently, successful treatment of subretinal neovascularization with intravitreal injections of an anti-VEGF agent has been described.6

To share an image, contact Manish Nagpal, MS, DO, FRCS(Edin), at drmanishnagpal@yahoo.com.
Note: Images should be 400 dpi or higher and at least 10 inches wide.

Gel and Genes: Novel Ways to Intervene! A Summary of VBS 2020