Imaging is an integral part of the evaluation of pediatric retina patients. Given the unique challenges in pediatrics, imaging is particularly helpful in augmenting patient histories and clinical examinations in this patient population. Imaging in pediatric patients can help clinicians to detect pathology not seen on clinical examination and to monitor disease activity, provide guidance for treatment decisions, and serve as a tool for educating patients and their families.

The cases we describe in this article demonstrate some of the practical uses of retinal imaging in pediatric patients.

A 3-year-old boy was referred for leukocoria with no light perception vision in his right eye (Figure 1). Examination revealed an exudative retinal detachment, and fluorescein angiography (FA) showed multiple light-bulb aneurysms. OCT demonstrated intraretinal and subretinal fluid and exudates, as well as disruption of the ellipsoid zone and the external limiting membrane.

Figure 1. A 3-year-old patient presented to the clinic with no light perception in his right eye. External examination (A), fundus examination (B), and FA (C) helped clinicians identify a retinal detachment.

Recent studies have demonstrated the utility of OCT in the management of Coats disease.1,2 Gupta et al found that microstructural retinal abnormalities in Coats disease, such as intraretinal edema and subretinal fluid, may be identified more frequently with OCT than with clinical examination. These microstructural abnormalities seen on OCT correlated with visual acuity, visual prognosis, and clinical disease staging.1

Ong et al also documented the benefits of using OCT along with fundus photography and FA in Coats disease.2 They found that exudates can form in all layers of the retina, particularly in the upper half of the outer nuclear layer in eyes with a macular star pattern of exudation. They also described extensive outer retinal atrophy above fibrotic nodules and the presence of small preretinal hyperreflective dots on OCT. These dots are of unclear etiology; however, the authors speculated that they may represent lipids, inflammatory cells, or red blood cells. This study also correlated OCT findings with histopathologic analysis, including hyperreflective linear structures that may represent cholesterol clefts, and hyperreflective dots in subretinal fluid that may be macrophages similar to those seen in central serous chorioretinopathy. Together, these studies demonstrate the benefit of using OCT in the evaluation of patients with Coats disease.

A girl born at 30 weeks and 5 days gestational age and weighing 1,560 g underwent examination under anesthesia (EUA) after screening for retinopathy of prematurity (ROP). Retinal examination revealed membranes overlying the optic disc and vascular arcades, causing retinal detachments in each eye, and anomalous retinal vasculature without plus disease in each eye. FA showed diffuse avascularity and neovascularization in each eye (Figure 2). 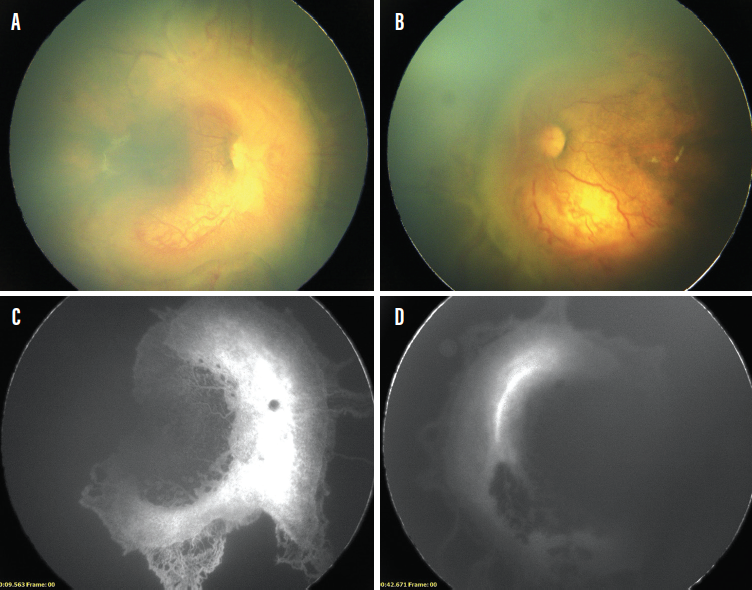 Figure 2. During examination for ROP, a patient was found to have retinal detachment in her right (A) and left eyes (B). Diffuse avascularity and neovascularization were noted in the patient’s right (C) and left eyes (D).

Gupta et al reported a series of three moderately premature neonates with aggressive posterior vitreoretinopathy (APVR).3 This entity, more consistent with familial exudative vitreoretinopathy (FEVR) than with ROP, is characterized by the presence of severe retinal pathology despite relatively older gestational age at birth and larger birth weight. APVR is characterized by an absence of prominent plus disease and is more aggressive than the entity known as ROPER (also called ROP vs FEVR).4 EUA with FA should be considered early and can help distinguish this entity from ROP.

The role of FA in pediatric retina patients has been an area of recent investigation in other disorders. Abraham et al evaluated pediatric patients with posterior-involving uveitis on immunosuppressive therapy deemed quiescent on clinical examination.5 They performed FA on these patients and found that 11 of 14 (79%) had persistent subclinical inflammation requiring a change in their immunosuppressive therapy. These authors emphasized the importance of FA for monitoring disease activity in pediatric patients. They also speculated that subclinical retinal vasculitis may contribute to the worse prognosis in pediatric posterior-involving uveitis.

Chee et al reported on the safety of FA specifically in the pediatric population.6 These authors found no significant adverse events during 214 FAs and no change in 5-minute preinjection and postinjection physiologic parameters in the 27 FAs that were conducted during EUA. The most common inpatient diagnosis was ROP followed by Coats disease, FEVR, and nonaccidental trauma. The most common outpatient diagnosis was Coats disease, followed by FEVR and sickle cell retinopathy. They found that FAs were done as inpatient procedures more often for younger patients, given patient cooperation issues and the need to coordinate with intervention under anesthesia.

These studies, taken together, demonstrate the safety and importance of FA in managing pediatric retina patients.

A 9-year-old girl with an exophoria was found to have counting fingers VA in the right eye. The patient was born full-term with normal birth weight and had no history of ocular trauma, surgery, systemic illness, or similar family history. Examination revealed a large peripapillary subretinal lesion with associated retinal edema (Figure 3). OCT confirmed subretinal hyperreflective material with associated intraretinal and subretinal fluid. FA demonstrated vascularization of the lesion with leakage. OCT angiography (OCTA) was performed to show flow within the subretinal hyperreflective material. A diagnosis of choroidal neovascularization (CNV) was made, and serial anti-VEGF intravitreal injections were performed, with subsequent improvement in the intraretinal and subretinal fluid. 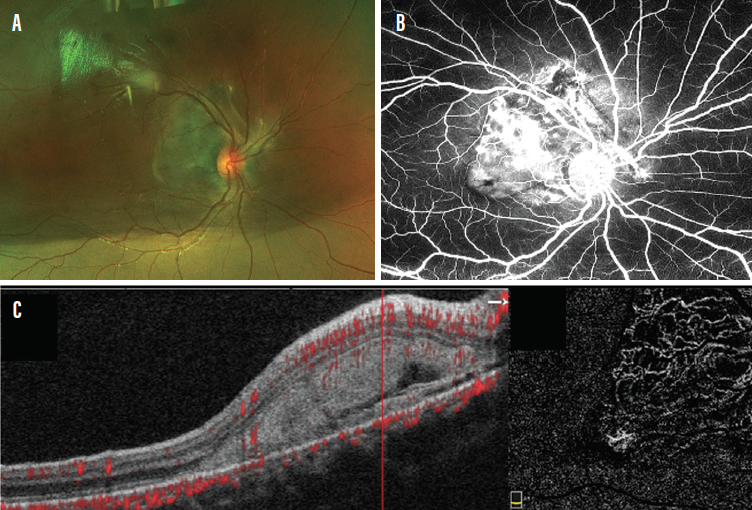 Figure 3. A large peripapillary subretinal lesion was detected in a 9-year-old patient with counting fingers vision (A). Vascularization of the lesion was noted on FA (B), and subretinal hyperreflective material was observed on OCTA (C).

Ong et al reported eight patients with pediatric CNV evaluated with OCTA.7 These authors compared active and quiescent CNV and demonstrated the presence of fine capillaries, anastomoses, and vessel loops in active cases. These findings may be helpful in monitoring for CNV recurrence and may indicate when repeat FA and treatment is appropriate.

Another potential role for OCTA is in screening for retinal pathology. Alam et al used machine learning–based artificial intelligence to differentiate and stage OCT angiograms of patients with nonproliferative diabetic retinopathy and sickle cell retinopathy.8 Using their screening tool, they were able to quantify blood vessel tortuosity, caliber, density, and branch-point geometry, as well as the foveal avascular zone contour irregularity and area. Using these OCTA parameters, their screening tool achieved 94.84% sensitivity to identify retinopathy from the general pool of controls. These findings support the use of artificial intelligence in screening vulnerable groups without access to retinal specialists, including the pediatric population.

The role of OCTA in the management of pediatric retinal patients remains to be fully explored, but the studies noted here contribute to the limited volume of knowledge to date.

Fovea Plana in a 6-Month-Old Infant