A patient's undisclosed medication makes for a difficult differential diagnosis in this case report.

A 58-year-old white man presented with a 1-week history of blurred vision in both eyes. He reported no photophobia or eye pain and no history of ocular trauma. The patient’s ocular history was relevant for primary open-angle glaucoma in both eyes. He had undergone trabeculectomy in his right eye in 2015 and was taking brinzolamide, bimatoprost, and a fixed combination of brimonidine and timolol in the left eye at the time of presentation to our center. He had no significant past medical history and was not taking any oral medications. In the review of systems, he reported no headaches, hearing loss, or joint pains. At the time of initial evaluation, the patient denied the use of any topical, inhaled, or oral corticosteroid-based medications.

On examination, his Snellen BCVA was counting fingers at 1 foot in his right eye and 20/200 in his left eye. IOP was 2 mm Hg in his right eye and 22 mm Hg in his left eye. Anterior segment evaluation revealed corneal endothelial pigment deposition in both eyes. Posterior segment examination revealed serous retinal detachments in both eyes and choroidal effusions in the right eye (Figure 1).

Figure 1. Fundus photographs of the right and left eyes show serous retinal detachment in each eye. 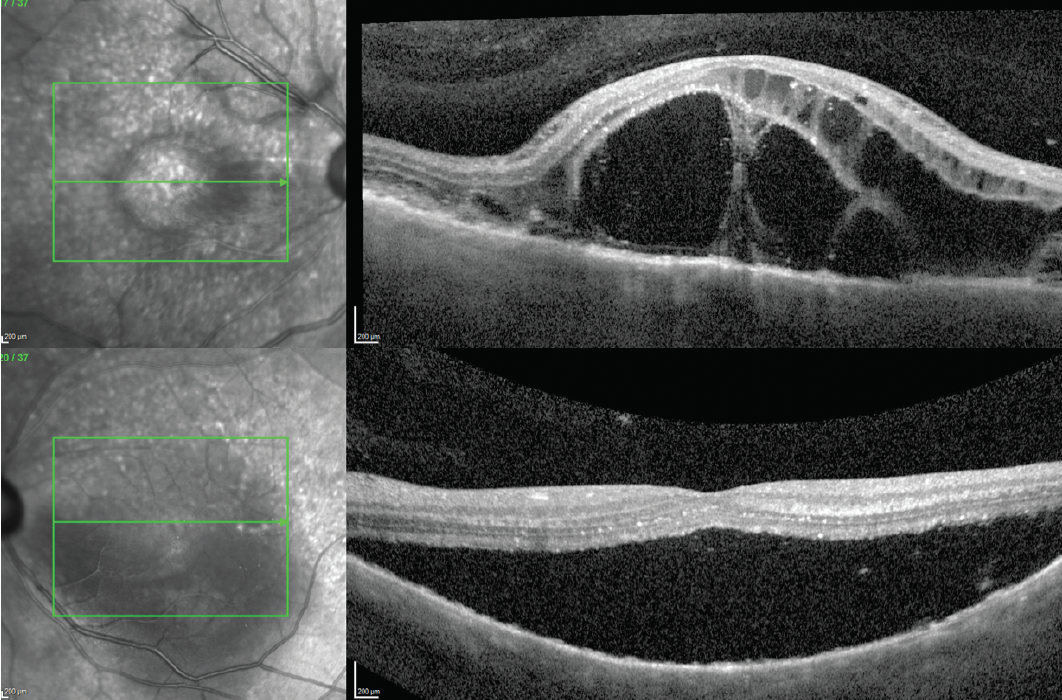 Figure 3. Fluorescein angiography of the right (top) and left (bottom) eyes shows multifocal areas of pinpoint leakage in each eye.

Our initial differential diagnosis included causes of an inflammatory exudative choroidopathy, such as Vogt-Koyanagi-Harada (VKH) disease or sympathetic ophthalmia. Other causes of panuveitis, such as tuberculosis, sarcoidosis, and syphilis, had to be excluded. The patient was started on oral prednisone 80 mg daily and was referred to a uveitis specialist for further workup. Further evaluation included testing for Toxoplasma gondii (negative), QuantiFERON-TB Gold (Qiagen; negative), angiotensin-converting enzyme and lysozyme levels (normal), rapid plasma reagin and fluorescent treponemal antibody absorption testing (nonreactive; negative), and chest x-ray (normal).

Over the next month, the patient’s serous retinal detachments improved slightly while the dose of prednisone was tapered. When the taper reached 40 mg/day, the exudation once again worsened. At this time, the decision was made to inject a dexamethasone intravitreal implant 0.7 mg (Ozurdex, Allergan) into the patient’s left eye.

At the next visit, no significant improvement of the subretinal fluid in the left eye was seen. At this visit, upon further questioning, the patient revealed that he had been taking oral oxymetholone, a strong androgenic and anabolic steroid, for physique-enhancement purposes—something which he had not reported at previous visits.

Given these findings and the patient’s variable response to steroids, it is most likely that the patient had a variant of central serous chorioretinopathy (CSCR). The oral steroids were stopped, and the patient was instructed to cease using the oxymetholone pills. At the most recent follow up visit, 2 months after stopping the oral prednisone, BCVA was 20/70 in the patient’s right eye with resolving subretinal fluid and 20/30 in the left eye with no subretinal fluid (Figure 4). Observation of the patient continues, awaiting further improvement.

CSCR is a common condition characterized by accumulation of subretinal fluid in the macula along with pigment epithelial detachments (PEDs). The pathogenesis of CSCR is not fully elucidated, but studies have shown that it may be related to abnormally hyperpermeable choroidal capillaries.1 CSCR has a strong association with exogenous and endogenous corticosteroids.2 An association has been suggested between CSCR and certain personality factors, including type A personality and psychological stress.3

Our patient was initially thought to have VKH, given his bilateral exudative retinal detachments with subretinal septa in his right eye on OCT, as well as fluorescein angiography showing multifocal macular leakage in both eyes. The patient also had a dome-shaped mass of intraretinal fluid, termed a bacillary detachment, which is commonly seen in patients with VKH. Of note, our patient did not have optic nerve leakage on fluorescein angiography, which is often seen in VKH.

The patient demonstrated a variable response to high-dose corticosteroids. Given his (initially concealed) consumption of oxymetholone and his clinical improvement after stopping the oral prednisone, the clinical picture is more consistent with atypical CSCR.

The acute stages of VKH and CSCR can sometimes be confused with one another. In one report, 90 of 410 patients with VKH disease had initially been misdiagnosed as CSCR.6 In a study including 35 patients with VKH and 25 with CSCR, Shin et al found that PED in CSCR and optic disc hyperemia in VKH had the highest positive predictive values (100%), respectively.7 Of note in that study, during late-phase fluorescein angiography, multifocal leakage was observed in 90% of eyes in the CSCR group. Lin et al found that subretinal septa and folds of retinal pigment epithelium were seen only in eyes with acute VKH, whereas patients with CSCR had significant PEDs and bulging of retinal pigment epithelium.8

Noting the presence or absence of optic disc hyperemia, subretinal septae, PEDs, systemic symptoms, and use of any medications can be of benefit in distinguishing these two entities. Our patient had initially withheld information regarding his use of a high-dose anabolic and androgenic steroid. Despite initially starting treatment with oral prednisone, the patient has improved with observation after cessation of the androgenic steroid.

The Paths to Success

The Pathway to the Podium

Insight into Real-World Treatment of nAMD

The Role of the New Generation of Lasers in Retina