A landmark interview with one of the power couples of retina.

When I asked Retina Today if profiling Carol L. Shields, MD, and Jerry A. Shields, MD, was a good fit for the Women in Retina issue, they agreed that an intimate portrait answering the questions we all have—How do they do it? What's the secret?—was long overdue.

Here, two leaders in ocular oncology sit down for an all-too-brief discussion about their partnership. The interview has been edited for length and clarity.

Retina Today: Tell us about how you first met.

Jerry A. Shields, MD: We first met when Carol came to Philadelphia for her ophthalmology residency. I was already on staff there and was fortunate enough to meet her when she joined Wills Eye Hospital.

Carol L. Shields, MD: It was 1984 and I was fresh out of my internship, and I was sort of dating a nice young man from Pittsburgh. I had no intention of meeting anybody at Wills and was happy-go-lucky on my own. When I arrived, I had never even heard the words Jerry Shields.

Wills had a mixed doubles tennis event, and they needed someone to fill in, so I volunteered. Tennis wasn't my favorite (my sport is basketball), but I said sure, I'll play. My partner was Jerry Shields. We played tennis—he was pretty good—and when the evening was over, I thought that was it. We just went our separate ways.

Jerry: And then I asked her to join me at a Philadelphia 76ers game because I knew that she played college basketball at the University of Notre Dame.

Carol: It was a lot of fun. And about a month later, I hosted a Christmas party for my class at Wills. And who shows up? Jerry Shields. I had only invited my class to the party, so I knew he was up to something.

Jerry: After that, I invited her to join me on New Year's Eve for dinner with Bill Benson, MD, and his wife.

Carol: I looked at him cross-eyed and said, “Are you kidding me? I'm not sure we're a couple yet.” So we laid low for a while, and then later we went public.

Carol: Jerry was a bachelor—and a desperately handsome young doctor—who was married to his work.

Jerry: Carol had a brother in Pittsburgh, and she wanted to return there and practice with him. If she did that, it would have been the end of me.

Carol: That was 36 years ago. I still haven't made up my mind if I'll join my brother or not.

RT: What were some of the challenges you faced from being a couple in the same field and workplace?

Carol: I can name three things that I felt were challenges. The first challenge: I was his wife, and Jerry would introduce me as his wife, not as Dr. Carol Shields. So that was a little difficult.

The second challenge: I took his last name. I've often wondered if I should've just kept my maiden name because that would have made us two different people.

The third challenge: Wills Eye Hospital was 99% male doctors back then, and it was a challenge to get referrals. But I have to say, there were a couple of doctors at Wills who started referring to me—it's just nice to get your own referrals. It makes you feel like you're actually making an impact.

Jerry: I knew Carol was a great person and we didn't compete in any way.

Carol: It's true, we never competed. If you're a married couple, you should never compare yourselves. I mean, he was already very well established and knew everyone; I was just starting out.

We actually had a very good working relationship because I crossed all the T's and dotted all the I's and made the patient care seamless, which was a completely different job than what Jerry was doing. He was out lecturing and bringing in patients and was an international figure.

Jerry: It's fair to say that we worked in the same office but had two very different jobs.

Carol: Being in same business and attending the same meetings can be a lot of work, and a lot of fun.

Carol: It was so nice because it was just us. We would always carve out one evening for the two of us go out and have a dinner together. Jerry always wanted to go out and socialize with everyone, but we made sure to keep one evening to just spend time together and reminisce on how things are going with the kids and our lives.

Carol L. Shields, MD, and Jerry A. Shields, MD, offered Retina Today a pictorial view into their personal lives. Here is a selection of photographs spanning the three decades. 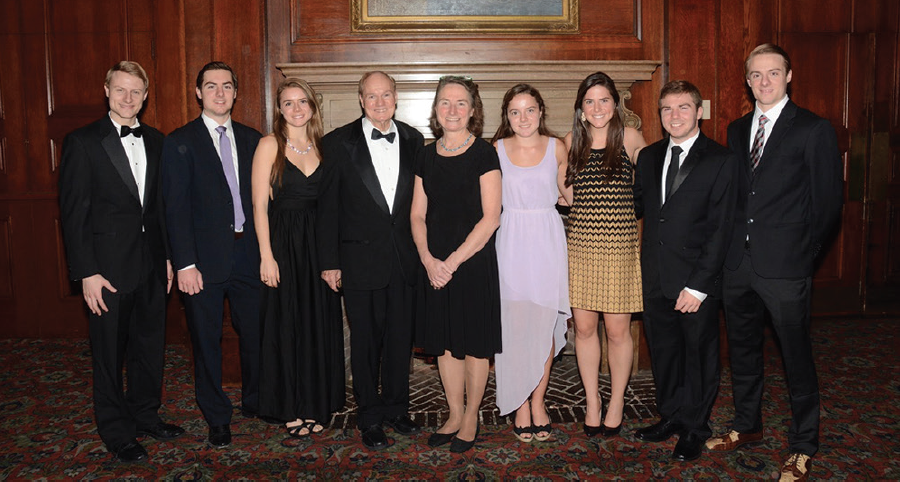 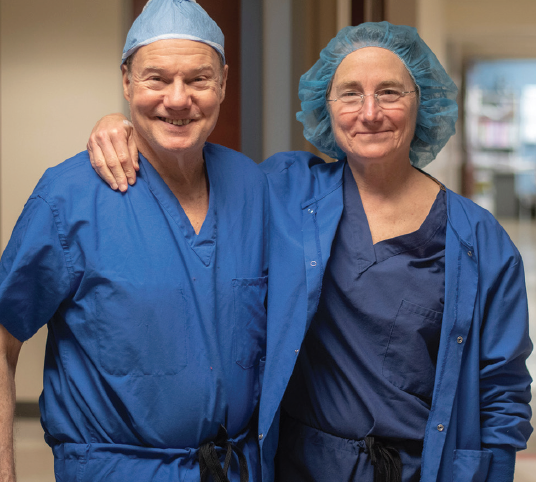 Drs. Carol and Jerry Shields paused for a picture in the Wills Eye Hospital OR. 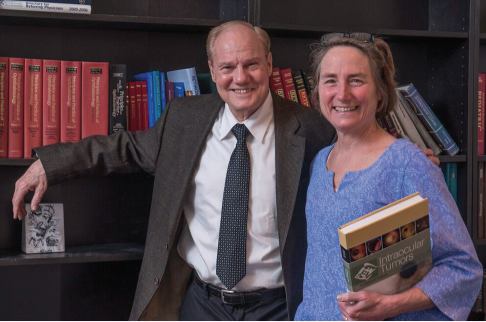 Drs. Carol and Jerry Shields with a copy of Intraocular Tumors: An Atlas and Textbook, Second Edition, which they coauthored. The book's third edition was released in 2016. 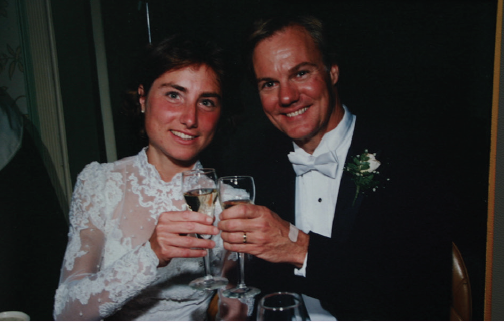 A picture of the happy couple on the day of their wedding.

Drs. Carol and Jerry Shields (left photo) set out on a bike riding adventure with their seven children (right photo) approximately 15 years ago.

THE INTERSECTION OF FAMILY AND CAREERS

RT: When you decided to start a family, did you think about how it was going to affect your careers?

Carol: I knew it would affect my career. When our kids were young, I couldn't go to the AAO Annual Meeting or any of the big retina meetings because it was too much work to leave the kids with babysitters. But after the kids were in grade school and things started going smoothly, I started attending more meetings and becoming more career-oriented.

We both come from large families; each family had eight children. I really wanted to have as normal a life as possible. I definitely wanted children.

Jerry: I didn't worry about it because I knew that I'd finally met a fantastic woman who believes everything like I do. We were good buddies.

Jerry: We have a total of seven children, and during all of that time she was taking fellowships.

Carol went to England for fellowship training a few months right after we had our first baby, and this was a giant step in our marriage. Following fellowship, we went ahead and had a few additional children. Every time she would have another baby, I would hang in there as best I could. She was hanging in there better than I was.

Carol: We realized that we probably needed really skilled home-help for our growing family. We soon found a husband and wife couple to help us with the kids. We moved out of the city of Philadelphia to a little farm that had a cottage on it. We hired a couple who worked full-time at our house; the husband did some cleaning and fixed broken doorknobs and drove the kids to school, while the wife got the kids up in the morning, got breakfast ready, and later prepared dinner. There was enough to keep them both busy.

Jerry: The first couple we hired were Polish immigrants. We're still in touch with them. They are wonderful people; they actually raised their daughter with our seven children. It was like a family of eight kids.

Carol: When we were looking to hire a second couple after the first couple moved on, we turned to a woman who worked at Wills Eye as a typist. She wanted to have a career as a housekeeper. She took over the job, and her husband joined her in the cottage. We employed them until the kids were grown and gone.

Jerry: Carol and I were very close to our respective families, and both of us came from large families. Our other siblings had children, and our kids grew up with their children and those in the neighborhood.

Carol: Every child was a blessing. I've never looked back for one minute and ever regretted having a family, skipping this meeting to go to a lacrosse game, or cutting out of clinic a little early to go watch one of our kids play in a tennis match. We've had a lot of fun watching the kids grow up.

Jerry: Absolutely. I wouldn't trade that for anything.

RESERVING TIME FOR EACH OTHER AND FAMILY

RT: You had a family with seven children and the rigorous calendars of retina specialists. Your schedules must have been packed. How did you reserve that time for yourselves?

Carol: Every day is busy, but if I could line up all the things in our joint career, the best thing was having a family. Don't you think?

Jerry: Absolutely. We worked hard in our practice, but always slipped time aside to take vacations with the family and then later to build the practice.

Carol: We didn't initially have time to go on a date night when we first started a family, but we organized our office around our lives to give us more time. Our office opened early in the morning, so we could check in patients, complete imaging tests, provide examination, and have everything wrapped up so that we could finish in time to get home for dinner with our children. Jerry and I made it a point to be home by 5:00 or 6:00 so that we ate dinner as a family every single night.

We always had a lit candle on the table. We still do. It symbolizes the family unit and that we are all here for each other.

Jerry: It takes a lot of organization to have a big family. No matter what field you're in, whether or not it's medicine, when there are two working people in the family, it's a big job having a lot of kids.

RT: Imagine two young retina specialists who have hit it off are going on their first date. Given your experience, what piece of advice would you give?

Carol: I would tell them three things. Number 1, be yourself, and don't try to be anybody else. Number 2, as this relationship matures, make sure you always communicate. And number 3, always be careful to consider all the needs of yourselves as a couple or as a family, and not just you as single person.

Jerry: I would tell them to develop a close relationship and try to keep it that way. We've been very successful in that regard, always supporting our own children and our family.

Carol: When you find a person who understands you and your specialty, that's a treasure. They will understand why every Thursday night you want to prepare for grand rounds the next day.

Carol: We're a strong couple and we have similar interests, but Jerry and I, we're not exactly alike. Jerry is, I think, a more happy-go-lucky guy, and I'm more of an organizer. And our differences have complemented each other well.

Insight into Real-World Treatment of nAMD

The Role of the New Generation of Lasers in Retina