Will this imaging modality lead to better assessment of patients with dry eye disease?

OCT angiography (OCTA) is a novel technology that produces depth-encoded segmented images of flow in the retinal and choroidal vasculature along with a coregistered structural and en face OCT. Its use has been extensively explored in exudative (wet) age-related macular degeneration (AMD) and diabetic retinopathy.

Much of the clinical utility of OCTA has been related to qualitative evaluation of macular neovascularization (MNV) in exudative AMD, as this technology is capable of providing, after proper segmentation, sharp, detailed, depth-resolved images of MNV. Because the manifestations of AMD are primarily confined to the retinal pigment epithelium (RPE)–Bruch membrane complex and choriocapillaris, swept-source OCTA (SS-OCTA) may add information in the assessment of this disease compared with spectral-domain OCTA (SD-OCTA). The longer wavelength used in SS-OCTA (1050 nm) enhances penetration through the RPE with less backscatter.1 However, the benefit of SS-OCTA over SD-OCTA in clinical practice is not clear.

New insights into disease pathogenesis in nonexudative (dry) AMD are emerging from OCTA imaging. Considering the broad spectrum of clinical features that nonexudative AMD may demonstrate, we outline three areas in which OCTA may provide utility: imaging of subclinical nonexudative MNV in intermediate AMD and geographic atrophy (GA), assessment of choriocapillaris perfusion in intermediate AMD, and assessment of choriocapillaris perfusion in GA.

Before the advent of OCTA, the presence of nonexudative MNV had been demonstrated in intermediate AMD through histopathologic findings and ICG imaging.2-5 It was hypothesized that hypercyanescent plaques on ICG angiography corresponded to MNV.4 However, because these findings were seen before anti-VEGF therapy became available, and because ICG is an invasive test, the clinical utility of this assessment was limited.

OCTA has allowed in vivo confirmation of nonexudative MNV in eyes with intermediate AMD. Studies utilizing this technology have demonstrated a prevalence of nonexudative MNV in 14% of fellow eyes in patients with contralateral exudative AMD.6,7 This is consistent with the prevalence of abnormal ICG findings (hypercyanescent plaque or spots) demonstrated by Hanutsaha et al in 11% of fellow eyes of patients with unilateral exudative AMD,4 but with the advantage of using noninvasive OCTA as a screening test.6,7

Nonexudative MNV may be present in a low-lying fibrovascular pigment epithelial detachment imaged on structural OCT, which is referred to as the double-layer sign. Shi et al showed a positive predictive value of up to 76% for the double layer sign on structural OCT in identifying nonexudative MNV.8 An OCTA imaging feature that helps to diagnose the presence of MNV within a double layer sign is the flow overlay, in which decorrelation signals corresponding to flow are generated for the OCTA image and superimposed onto the coregistered structural OCT. The presence of flow underneath the RPE and above Bruch membrane in a double-layer sign raises the index of suspicion for MNV and, combined with adequate segmentation, allows the visualization of the neovascular complex on en face images (Figure 1).

Eyes with nonexudative MNV in intermediate AMD are at a higher risk of progression to exudative AMD than eyes without MNV.6 Nevertheless, the current management for this condition remains observation. The recent PRO-CON study did not demonstrate benefit of anti-VEGF treatment, in eyes with intermediate AMD, in reducing progression to exudative AMD, and this included eyes that had nonexudative MNV on OCTA; however, this study was not specifically designed or powered to investigate the effects of anti-VEGF therapy in nonexudative MNV.9

Although there is no established treatment for patients with nonexudative MNV at risk for conversion to exudative AMD, OCTA is a noninvasive tool that can be used to identify and follow these patients.

NONEXUDATIVE MNV IN EYES WITH GA

Nonexudative MNV has also been identified in eyes with GA, often located within a low-lying pigment epithelial detachment adjacent to the edge of the atrophy.10 It has been proposed that hypoxia secondary to choriocapillaris atrophy on the GA site leads to an increase in VEGF secretion and ultimately to development of MNV at the borders of the GA, where a remaining choriocapillaris bed supports growth of the neovascular complex.10-12 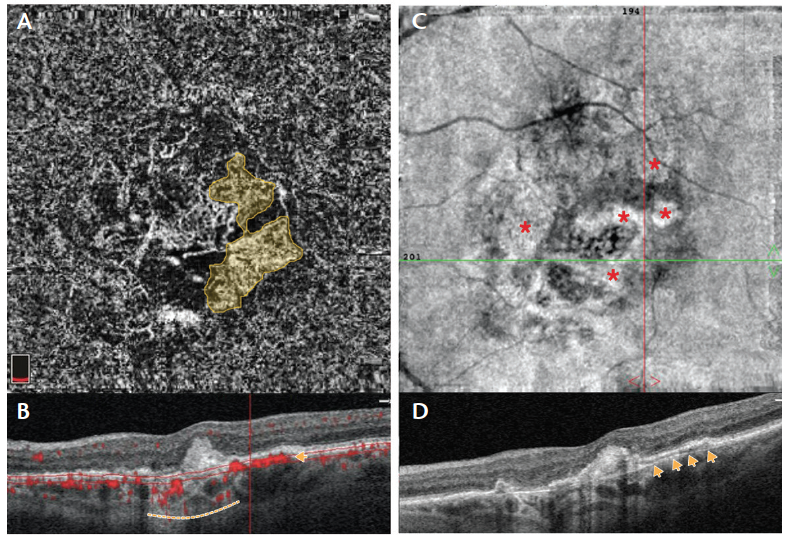 Utilizing OCTA for detection of nonexudative MNV in the presence of GA may be challenging, as the RPE atrophy and choriocapillaris defect on the GA site lead to hypertransmission of signal. This makes choroidal vessels from deeper layers more evident and more likely to be confounded with the MNV complex on en face visualization (Figure 2). Therefore, small nonexudative MNV may go unnoticed.10

Histopathologic studies have demonstrated that choriocapillaris perfusion decreases with normal aging and that this reduction is more marked in eyes with AMD.13,14 The development of OCTA, with its micron-resolved images of flow, has improved the exploration of choroidal circulation in AMD.

OCTA studies of the macula have corroborated that flow deficits in the choriocapillaris increase with normal aging15,16 and are significantly increased in advanced stages of AMD compared with intermediate stages.17 Flow deficits on OCTA are also increased in areas of drusen emergence and enlargement.18 Furthermore, choriocapillaris nonperfusion is increased in areas of reticular pseudodrusen compared with foci of sub-RPE drusen.19 Future research will evaluate the clinical utility of these findings and whether flow impairment in the choriocapillaris in early or intermediate AMD can predict progression to advanced AMD to yield a potential biomarker of AMD progression.

It is worth noting that images of the choriocapillaris in eyes with drusen or pigmentary epithelium detachment should be interpreted carefully. Presence of shadowing due to drusen occurs in both SS-OCTA and SD-OCTA images, but it is more prominent in the latter, leading to a false-positive interpretation of hypoperfusion in the choriocapillaris (Figure 3).20 The amount of signal loss due to shadowing as opposed to real nonperfusion is yet to be determined for both technologies. 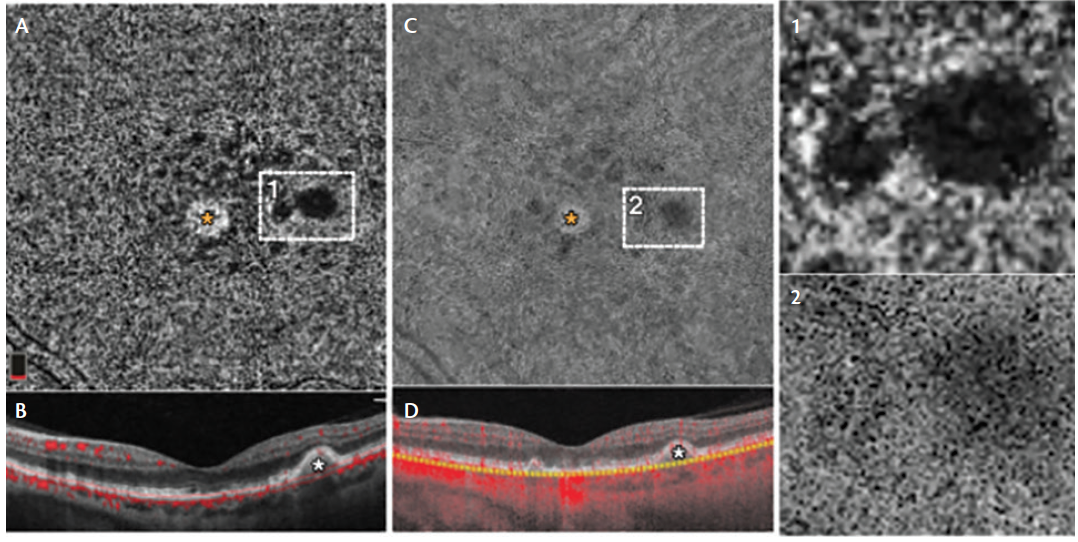 Figure 3. Choriocapillaris images of the same eye, acquired with SD-OCTA (A, B) and SS-OCTA (C, D), to compare signal loss due to drusen between these two technologies. A focus of GA can be seen in both SD-OCTA and SS-OCTA en face (A, C) images (yellow asterisks). En face SD-OCTA of the choriocapillaris slab (A) with areas of reduced signal corresponding to drusen on structural OCT (B, white asterisk). En face SS-OCTA choriocapillaris (C) with areas of reduced signal corresponding to drusen on structural OCT (D, white asterisk). Details illustrate the difference between SD-OCTA (Detail 1) and SS-OCTA (Detail 2) in the intensity of shadowing of the same drusen focus. On the SD-OCTA image (1), the signal loss underneath the drusen is more prominently impairing visualization of choriocapillaris at this site. On the SS-OCTA image (2), despite some signal loss under the drusen, the choriocapillaris can still be appreciated.

Although these analyses are promising, they are still far from translation to a real-life clinical setting. Commercially available devices are not equipped with analytic software capable of analyzing flow in the choriocapillaris, limiting these assessments to the research setting. A standard methodology of processing and analyzing images that is reproducible across research groups is needed as a first step to unify the language in the field, as the methodologies used for these assessments vary widely among imaging groups, weakening the interpretability of results.21,22

ASSESSMENT OF CHOROIDAL PERFUSION IN GA

GA remains a condition with no effective treatment, contributing to AMD's status as a leading cause of blindness. In parallel with clinical trials for drug development in this field, imaging research has sought biomarkers for GA progression. Choriocapillaris flow deficits have been assessed in eyes with GA, and the global hypoperfusion in this layer was correlated to the rate of GA enlargement.23 It has also been shown that areas around GA presented higher flow deficits,23,24 and that areas of nascent GA may be associated with focal choriocapillaris flow impairment.25

OCTA research in nonexudative AMD is an actively developing field, but it is still not entirely clear how this technology will fit into clinical practice. Potentially, OCTA may advance patient care in nonexudative AMD by improving the understanding of the disease's pathogenesis and by enhancing detection and monitoring of eyes at risk for conversion to exudative AMD. Further, as new therapies are developed, OCTA imaging features may prove to be useful endpoints for assessing treatment efficacy.

The Mother of Invention: Making Custom Equipment in Syria

How COVID-19 May Change the Future of Retina Practice