Drusen are extracellular deposits between the basal lamina of the retinal pigment epithelium (RPE) and the inner collagenous layer of Bruch membrane. These deposits are usually considered an early pathologic sign of age-related macular degeneration (AMD) and are rarely observed in patients younger than 50 years. Nevertheless, different drusen patterns can occur at earlier ages in conditions including cuticular drusen, malattia leventinese, and large colloid drusen (LCD).

Advances in OCT technology have allowed clinicians to image the outer retinal structures with better definition, leading to better characterization of the features of retinal and RPE degeneration. This improvement has facilitated better distinction and differentiation between different drusen patterns, including those of early onset, such as LCD.

LCDs are large (200–300 µm) yellowish, bilateral lesions with hyperpigmented borders scattered throughout the posterior pole, usually well identified on fundus examination. In most cases, LCDs appear on OCT B-scans as multiple convex or dome-shaped structures outside of the RPE, with medium homogeneous internal reflectivity and marked attenuation of the ellipsoid zone overlying the LCD. These drusen are homogeneously hyperfluorescent in late-phase fluorescein angiography images. In late-phase indocyanine green (ICG) angiography images, LCD are either hyperfluorescent or hypofluorescent and surrounded by a discrete hyperfluorescent halo.

The advent of the multimodal imaging approach that has occurred in recent years has increased the visual information at our disposal, allowing us to perceive the long-term prognostic risks of LCD.

Here we present the case of a patient with LCD seen in the ophthalmology department of Centro Hospitalar e Universitário do Porto. The eye was imaged with spectral-domain OCT (SD-OCT) and autofluorescence (Spectralis SD-OCT, Heidelberg Engineering), color fundus photography, and fluorescein angiography.

A 37-year-old woman was referred for ophthalmology consultation because of a pterygium in her left eye. At presentation, the patient was asymptomatic, with BCVA of 20/20 OD and 20/20 OS. No clinically relevant personal or family ophthalmology history was reported. A biomicroscopy examination revealed a grade 2 pterygium in the left eye with no other changes. On examination of the ocular fundus, large bilateral macular drusen with temporal predominance were found, and a retinal imaging study was requested.

Color fundus photography images are presented in Figures 1 and 2. SD-OCT demonstrated large drusen in the temporal macula bilaterally, with no changes within the retina outside the foveal area (Figures 3 and 4).

Figures 1 and 2. Color fundus photography images for left and right eyes at presentation. 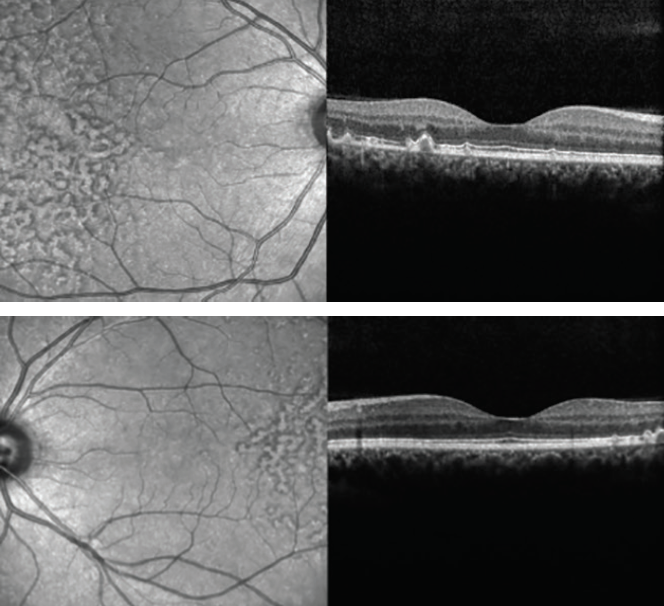 Figures 3 and 4. SD-OCT demonstrated large drusen in the temporal macula bilaterally, with no changes within the retina outside the foveal area.

Three years after our initial evaluation, OCT remained similar (Figures 5 and 6) and the lesions appeared with hyperautofluorescence (Figure 7 and 8). Four years after the first evaluation, SD-OCT showed the characteristic sawtooth pattern, similar to the findings in the initial exam (Figures 9 and 10). Additionally, on fluorescein angiography, the lesions showed late hyperfluorescence with progressive staining but no diffusion, attesting to the stability of the disease (Figures 11 and 12). 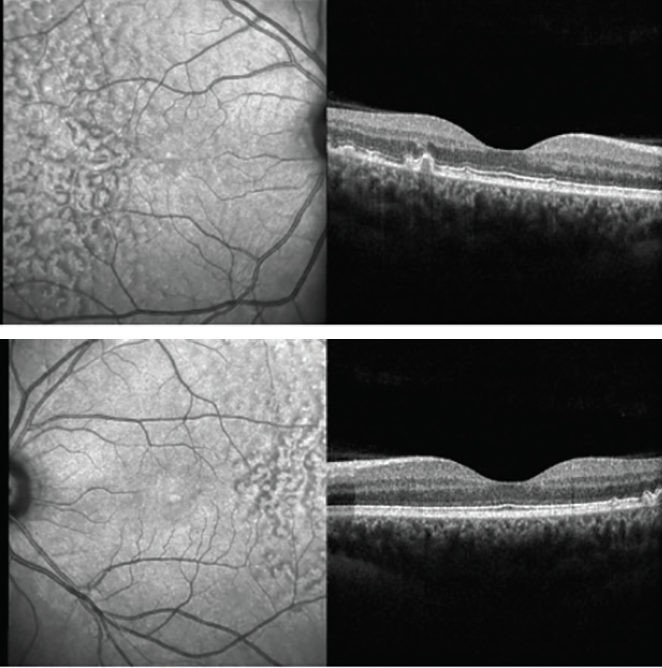 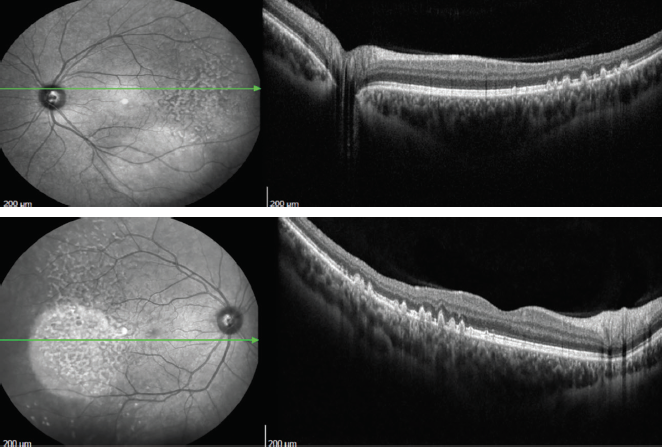 Figures 9 and 10. Four years after initial evaluation, SD-OCT showed a characteristic sawtooth pattern, similar to the findings in the initial exam. 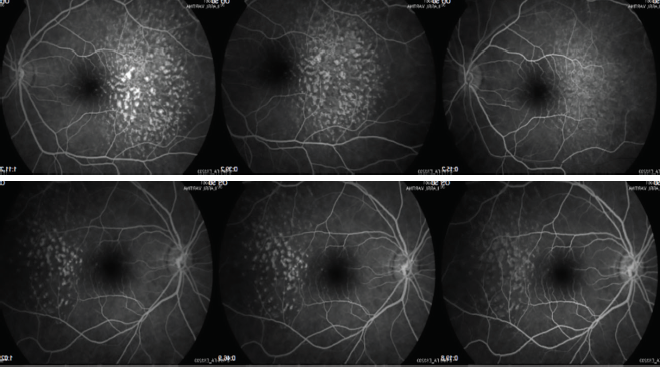 Figures 11 and 12. Lesions showed late hyperfluorescence with progressive staining but no diffusion on fluorescein angiography at 4 years follow-up.

Early-onset drusen (age < 50 years) are rarely seen and can be divided into cuticular drusen, malattia leventinese, and LCD. The etiology and clinical significance of LCD remain unknown. Examination of the ocular fundus usually reveals bilateral soft macular drusen, typically temporal to the fovea.

Recently, Roberti and colleagues described some OCT patterns that can help to differentiate LCD from the other patterns previously mentioned; on OCT, LCDs usually appear as sub-RPE convex lesions configuring retinal pigment epithelial detachments in a sawtooth pattern, with a height-to-base ratio close to 1; intermediate reflectivity, greater in the core in relation to the periphery; and attenuation of the ellipsoid zone.1 Additionally, a decrease in the thickness of all retinal layers is observed due to the compression effect, although the sensorineural retina is normally preserved. On en face images, the drusen appear with a hyperreflective center surrounded by a hyporeflective halo, which in turn is surrounded by two rings, one hyper- and the other hyporeflective.

LCDs are typically associated with minimal functional deficits, and therefore patients tend to be regarded as having good prognosis with no progression to advanced AMD. Guigui et al proposed that smaller lesions actually reflect an involutional phase.2 In their series of 22 eyes of 11 patients, there was no progression to advanced forms of AMD during 3 years of follow-up, but the risk of long-term evolution is unknown. Nevertheless, there has been a report of a case of polypoidal choroidal vasculopathy in an eye with LCD.3

Sakurada et al estimated a 5-year risk of progression to geographic atrophy (GA) and choroidal neovascularization (CNV) for patients with cuticular drusen.4 The authors identified three different phenotypes of cuticular drusen, the last of which being associated with LCD. This third phenotype was found to have increased risk of GA and CNV over the 5-year period of the study.4

The advent of multimodal imaging studies has revolutionized clinicians’ approaches to numerous retinal pathologies. In the presence of known changes with atypical presentations, multimodal imaging is an essential tool for better diagnosis, in order to achieve better risk stratification and support subsequent therapeutic decisions.