A survey suggests that many surgeons are unaware of differences between two commonly used drugs.

Acetylcholine is a naturally occurring neurotransmitter that mediates direct parasympathomimetic effects at cholinergic receptors, after which it is rapidly degraded by the acetylcholinesterase enzyme.2 Carbachol, in addition to direct binding to receptors, can also induce indirect parasympathomimetic effects by inhibition of the acetylcholinesterase enzyme. Hence, in comparison with acetylcholine, which has a very short duration of action, carbachol has a longer duration of action, up to 24 hours after intraocular administration.3,4

Given the differences in durations of action, it is not surprising that carbachol has been shown to be the better pharmacologic agent for controlling IOP after extracapsular cataract surgery.1 Acetylcholine, on the other hand, might be preferred by some anterior segment surgeons due to its rapid onset of effect, as may be needed in complex cases such as a penetrating keratoplasty triple procedure or Descemet-stripping automated endothelial keratoplasty.

Although both of these drugs have been used in ophthalmic surgeries for decades, many ophthalmologists may be unaware of the differences between the two drugs in mechanism and duration of action, as well as their relative costs. We performed a cost analysis and a knowledge survey to better understand current preferences in the use of these medications.

In our cost analysis, we evaluated the cost per unit, total cost, and frequency of use of these two medications at our surgery center.

Of those we invited to participate in a survey on Survey Monkey, 102 retina specialists responded. The survey questions were as follows:

Our cost analysis found that Miochol is more expensive than Miostat, with costs per unit of $63.72 and $13.08, respectively (Figure 1A). Consequently, despite infrequent use of these medications, a considerable amount of money could be saved by switching from Miochol to Miostat.

The survey results for 102 respondents (Figure 2) indicated that 69% of respondents use these miotic medications in less than 5% of their surgeries; 40% expressed preference toward Miochol, 16% toward Miostat, and 44% expressed no preference for either option. The survey also found that 65%, 74%, and 91% of respondents were unaware of the differences in the duration of action, mechanism of action, and cost between these medications, respectively. 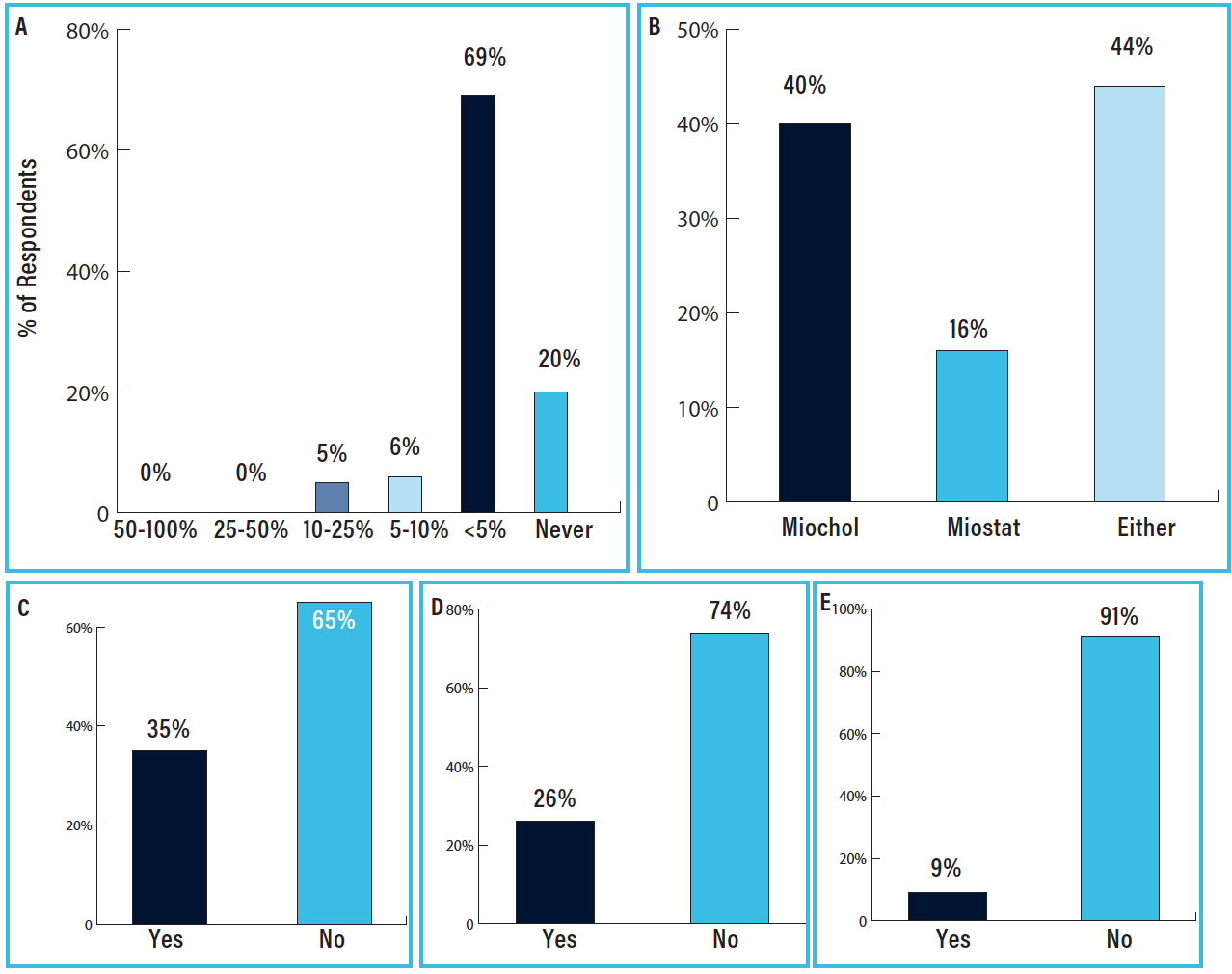 Despite its lower cost and longer duration of action, only 16% of respondents expressed a preference for Miostat. At our surgery center, a total of 237 units of Miochol were purchased in 1 year, with cost per unit of $63.72, compared with 84 units of Miostat with cost per unit of $13.08 (Figure 1B). We calculate that a complete switch from Miochol to Miostat would have saved our surgery center an estimated $11,000 in that 1 year.

This preference is likely due to a lack of awareness regarding differences in the cost and efficacy of these two miotic medications. By switching from acetylcholine to carbachol, our facility—and surely many other retina facilities nationwide—could save a considerable sum of money in the costs per case for a variety of ophthalmic procedures.

The authors wish to note that the content of their study was IRB exempt, according to their office of the institutional review board.