Real-world outcomes of vitrectomy for one of the most common complications after cataract surgery.

We (E.C. and L.W.) were recently among the coauthors of a study seeking to understand prognostic factors for and visual outcomes of 23-gauge microincision vitrectomy surgery for retained lens fragments after complicated cataract surgery. This article summarizes some of the salient findings of the resulting recently published paper.1

Although it is relatively uncommon for dislocated lens fragments to fall into the vitreous cavity, this event nevertheless remains a key complication of phacoemulsification surgery.2-4

What are modern real-world outcomes of microincision PPV? Many major studies on PPV for retained lens fragments have been based on 20-gauge systems, which many surgeons no longer use.6-11 We sought to understand if innovations in phacoemulsification and anterior vitrectomy technologies correlated with better outcomes.

What role does timing play in outcomes? We sought to understand the relationship between outcomes and the interval between primary cataract surgery and PPV.

Can a risk profile be established? We wanted to know if baseline patient characteristics could guide clinical and surgical management of these patients.

We aimed to analyze real-world data regarding visual outcomes and to identify independent prognostic determinants of these outcomes in patients who underwent PPV for dropped lens fragments with 23-gauge instrumentation.

All patients received topical steroids and antiglaucoma medications before PPV, and surgeons could administer topical sodium chloride 5% at their discretion.

Cases were reviewed within 2 days of the primary cataract surgery. If corneal clarity was determined to be sufficient, PPV was performed. Patients with insufficient corneal clarity due to stromal or IOP-related microcystic edema had their cases reassessed every 2 days for up to 2 weeks to determine the earliest possible time that PPV surgery could be safely performed.

All vitrectomies were performed with a 23-gauge, three-port PPV system (Constellation Vision System, Alcon). Corneal de-epithelialization was performed if deemed necessary to improve intraoperative view. Before retained lens fragments were addressed, posterior vitreous detachment was initiated and a posterior vitrectomy was performed in the usual fashion. Surgeons used the 23-gauge cutter to address lens fragments. A 20-gauge phacofragmatome was used for large fragments, if needed. Surgeons conducted a 360° depressed search and treated retinal breaks as detected.

IOL placement occurred during cataract surgery, during PPV, or during a subsequent surgery. If a surgeon determined that a patient’s visual outcome would be poor after IOL implantation, the eye was left aphakic.

The study’s primary outcome was the proportion of eyes that achieved 20/40 BCVA or better at 6 months and 20/200 BCVA or worse at 6 months. The nature and incidence of complications were secondary outcomes.

Univariate and multivariate logistic regression analyses were used to characterize all pre-, intra-, and postvitrectomy factors associated with achieving at least 20/40 BCVA or worse than 20/200 BCVA at 6 months.

We found that retained lens fragments were caused by posterior capsular rupture in 264 eyes (90.7%); in the other 27 eyes (9.2%), zonular dehiscence was the cause of retained lens fragments. Among all eyes, 55 (18.9%) demonstrated at least one type of retinal pathology, and 32 eyes (11%) had preexisting glaucoma.

Of the 291 eyes, 290 underwent PPV when the cornea was deemed clear enough for surgery. Only one eye underwent PPV for uncontrolled IOP. Photofragmentation with 20-gauge instrumentation was performed in 176 eyes (63.9%).

IOL implantation was performed during primary cataract surgery in 35% of cases, during PPV in 30% of cases, and after PPV in 29% of cases. In 6% of cases, it was not performed at all (Figure). The most frequent post-PPV complications were de novo ocular hypertension (29 eyes, 10%) and transient cystoid macular edema (CME; 25 eyes, 8.6%). Retinal detachment occurred in nine eyes (3.1%). 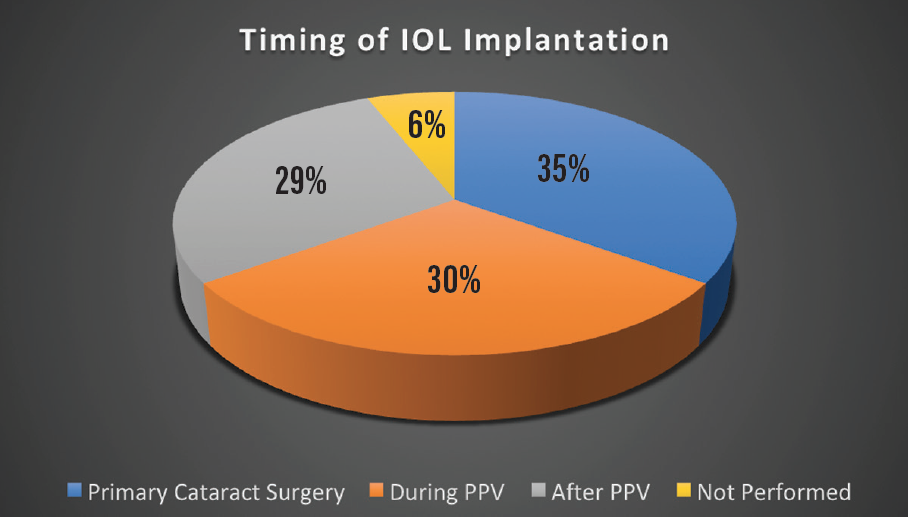 Our team found that final BCVA of 20/40 or better was independently associated with four factors: better visual acuity before cataract surgery, age less than 75 years, the absence of preexisting diabetic macular edema, and the absence of postvitrectomy persistent CME (P < .05). We found that final VA of 20/200 or worse was associated with poorer precataract surgery visual acuity, vitrectomy delayed more than 2 weeks, and final aphakic status (P < .05).

These visual outcomes do not represent an improvement compared with earlier large cohorts of predominantly 20-gauge PPV for retained lens fragments. These outcomes also appear poorer than established benchmarks after uncomplicated cataract surgery.

The reasons why the visual outcomes based on microincision vitrectomy do not represent an improvement from earlier predominantly 20-gauge cohorts are unclear, as we did not have access to the raw data of the earlier studies we used as a basis for comparison.

Nevertheless, the lower rate of post-PPV retinal detachment and macular edema in this study group underscores that smaller-gauge surgery has a better safety profile overall than 20-gauge surgery in those earlier studies. This apparently improved safety did not seem to translate into better visual outcomes, suggesting that other vision-determining factors are in play. Such factors may include the profile of other visual comorbidities of the patients involved in our study.

We also detected four patients with macular holes occurring after PPV. This condition has not been previously described. We hypothesize that this may have occurred from unregulated ultrasound energy from the phacofragmatome port, or during PPV induction.

Our multivariate analysis also showed that neither the timing of IOL implantation nor the location of the IOL itself (capsular bag, sulcus, or anterior chamber) influenced visual outcomes. Poorer visual outcomes were, however, associated with delays in PPV of more than 2 weeks and the development of post-PPV persistent CME.

Patients in this study were scheduled for PPV based on a common institutional protocol using corneal clarity as the main arbiter for PPV timing. To some extent, a common practice pattern can overcome some of the inconsistencies encountered with multiple studies having different thresholds for PPV. In a meta-analysis, Vanner et al found a general trend toward better visual outcomes with earlier vitrectomy.12 Modi et al showed no difference in visual outcomes when PPV was performed within the same day, within a week, or more than a week after PPV.6

In our study, PPV delayed by more than 2 weeks due to suboptimal corneal clarity was associated with poorer visual outcome. At the molecular level, this may be due to the upregulation of proinflammatory cytokines during this time, which may result in poorer outcomes. Although it may seem wiser to perform PPV as soon as possible, it may often be difficult to do so because of the poorer intraoperative view.

A second potentially modifiable variable affecting visual outcome is the development of persistent postoperative CME. It is difficult to fully understand whether there was initially uncontrolled inflammation in the eyes in our series following cataract surgery. However, in the postvitrectomy period, inflammation and CME were monitored and treated with an escalating paradigm based on topical NSAIDs, topical steroids, and sub-Tenon triamcinolone injection. In eyes with capsular ruptures and zonular dehiscence, there are concerns about use of an intravitreal dexamethasone implant 0.7 mg (Ozurdex, Allergan) because of possible migration to the anterior segment. Perhaps earlier treatment of inflammation, such as delivery of sub-Tenon steroids after primary cataract surgery, may mitigate early postoperative inflammatory drive and decrease the likelihood of CME.

This study is retrospective in nature, which may have introduced selection bias. Other ophthalmologist-determined factors such as nucleus size, perception of corneal clarity, extent of anterior uveitis, or IOP level, could also factor into the threshold for PPV.

Some readers may be surprised to find that, in this series, microincision innovation in surgical instrumentation did not appear to be associated with improved visual outcomes. Nevertheless, there was an overall better safety profile of small-gauge surgery, in terms of a lower risk of retinal detachment and postvitrectomy macular edema. The study data do provide some empirical evidence that performing PPV as soon as corneal clarity permits, and within 2 weeks of cataract surgery, as well as measures to prevent post-PPV CME, may be helpful in achieving better visual outcomes.