A small study may suggest a way to screen for early disease in patients with sickle cell disease.

Sickle cell disease (SCD) is the most prevalent structural hemoglobinopathy in the world. It is associated with multisystemic vascular occlusive events that can affect the retinal microvasculature.

Sickle cell retinopathy (SCR) is the most severe ocular complication of SCD. It is classified either as nonproliferative (NPSCR), with features including peripheral venous tortuosity, salmon-patch hemorrhages, iridescent spots and black sunbursts, or as proliferative (PSCR). Goldberg proposed a five-stage grading system for PSCR.1 Without early detection and treatment, SCR can lead to irreversible vision loss.2

Macular thinning and lower vascular density have been proposed as preclinical alterations preceding SCR development.3 Because these abnormalities are not detected in routine observations, imaging exams are crucial for SCR screening.

We performed a study to analyze the characteristics of the macula and temporal retina in children with SCD.

We collected clinical and laboratory data and performed ophthalmologic evaluation including BCVA, slit-lamp observation, and fundoscopy. 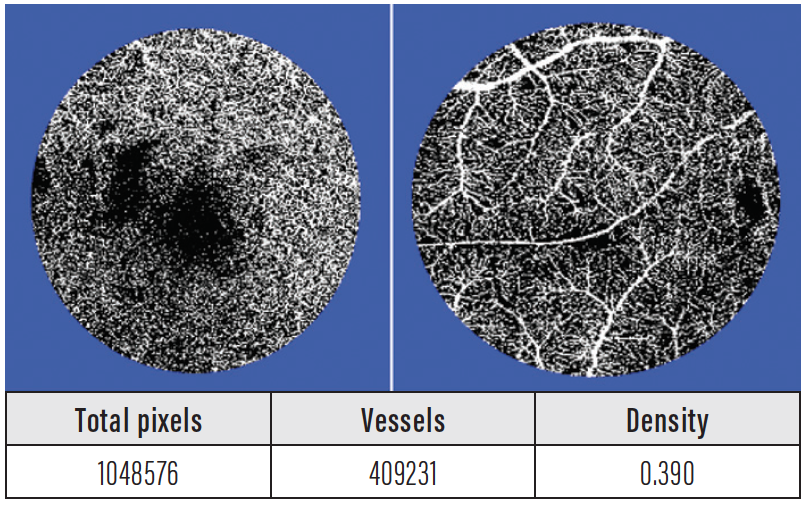 Figure. A deep vascular density (DVD) image generated by ImageJ. On the left is the fovea-centered image; on the right, the temporal retina. At bottom, the output calculated by ImageJ (here, for deep foveal capillary density).

Statistical analysis was performed using SPSS Statistics 23.0 (IBM). Mann-Whitney tests were used to compare eyes with and without SCR. Statistical significance was defined as P < .05.

Our study included 15 children with SCD; eight had SCR and seven had no SCR. For two children, information could be retrieved from only one eye due to lack of cooperation. Hence, data for 28 eyes were included in the study.

Patients’ mean age was 12 ±4 years. Demographic and laboratory data are presented in Tables 1 and 2, respectively. BCVA was 6/7.5 bilaterally in both the SCR and the no-SCR groups. 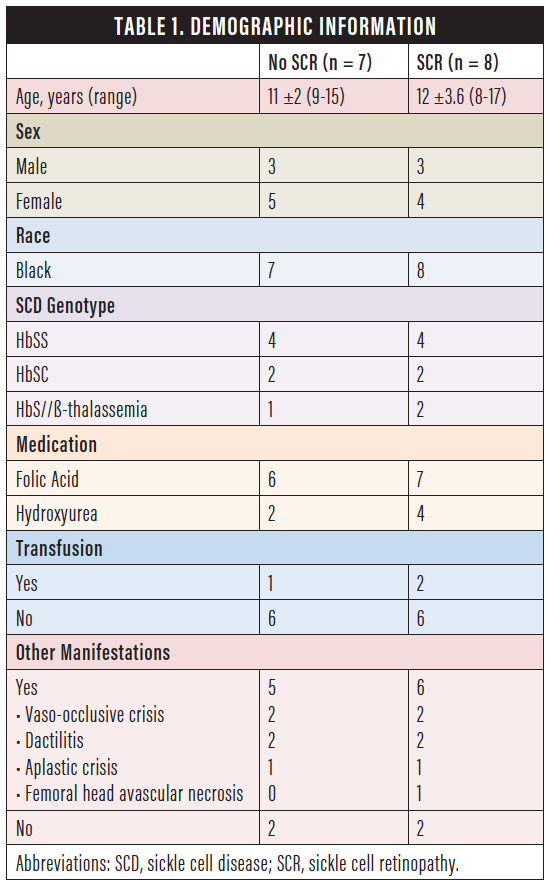 Fourteen of 28 eyes (50%) were classified as having NPSCR, and none had PSCR.

OCT data are shown in Table 3. There were no differences regarding foveal thickness between the SCR and no-SCR groups. 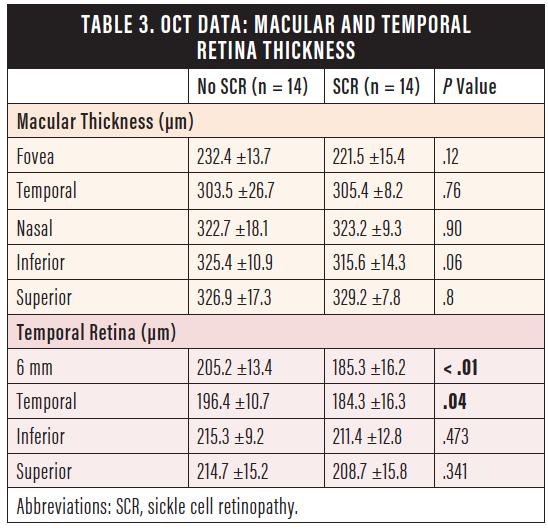 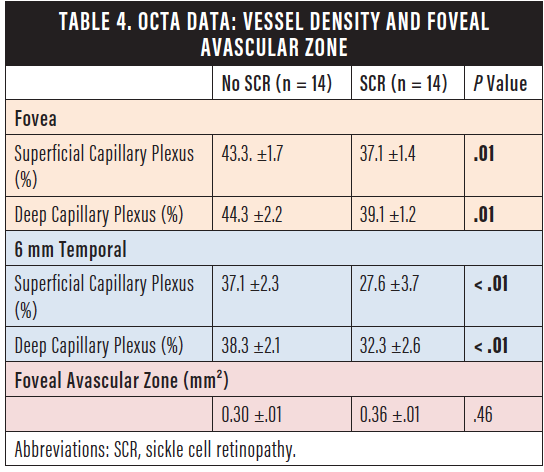 SCR can lead to serious visual impairment if not recognized and treated early. Recent work has led to the detection of certain retinal alterations that can predict the development of proliferative disease, improving early diagnosis and treatment.5-7

This finding suggests that the temporal macula may be more susceptible to damage due to the small caliber of terminal arterioles. The authors believe that reduced VD could be reliable markers of early retinal damage.

Because these alterations are commonly asymptomatic and most often undetectable in routine ophthalmologic examination, OCTA could be helpful in screening for SCR. It is important to highlight that screening should start early, but there is also a need to establish parameters for OCTA data in healthy children to further help in identifying those at risk for SCR. We propose that temporal retina scans should be part of regular evaluation of children with SCD.

Our results are encouraging and, despite the small sample size, may provide a basis for prospective clinical trials to define the role of OCTA in SCR screening.

A Stroke of Serendipity