Over the years we have seen an acceleration in scientific understanding and technological advances that have allowed the impossible to become possible. Particularly in ophthalmology, innovation and technology are progressing faster than in some other areas of medicine. Hope and expectations remain high on the frontier of neuroscience and neuroophthalmology, interfacing the worlds of the eye and the brain. Great breadth and depth of understanding will be required to build a world of bionic vision for those who have lost their sight due to retinal dystrophies.

• The Iris II uses epiretinal stimulation achieved by stimulating the retinal surface layer with an electrode array that stimulates the retinal ganglion cells and the inner retina.

• Because no scleral band is involved, the implant procedure for this device averages 2.5 to 3 hours. The device can be explanted and exchanged, if necessary.

Several companies and consortia around the world have initiated efforts to develop prosthetic vision systems (Table). Among them is Pixium Vision, which has pursued efforts with retinal bionic vision systems along two paths, using epiretinal and subretinal implants. These efforts aim to provide meaningful vision to people who have lost their sight as a result of a retinal dystrophy such as retinitis pigmentosa (RP) or age-related macular degeneration (AMD).

The Iris II bionic vision system (Pixium Vision) is an electronic prosthesis system that recently received CE Mark approval in the European Union for use in individuals with vision loss caused by outer retinal degeneration. The Iris II is designed to restore limited vision to patients blind from RP, Usher syndrome, cone-rod retinal dystrophy, or choroideremia. 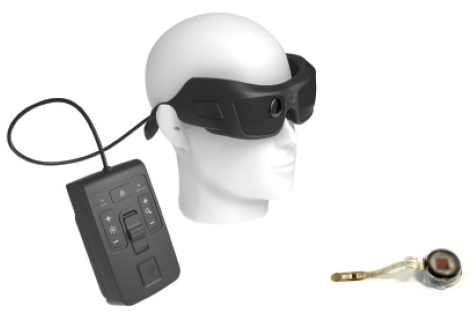 The Iris II bionic vision system (Figure) uses epiretinal stimulation, which is achieved by stimulating the retinal ganglion cell layer of the inner retina. The system bypasses the degenerated photoreceptors and electrically stimulates the remaining functional nerve cells in the retina to create light perception. The location of the perception corresponds to the location of the stimulation in the visual field. Stimulation of the retina with a large number of electrodes at different locations can therefore be used to create more complex patterns so that the patient perceives an image.

The system consists of implantable and external components. The implantable component is inserted in one eye during a typical vitreoretinal surgical procedure. The implant is introduced through a pars plana incision and is fixated with a retinal tack. The implant array is fixated onto the tack using a silicone ring. This innovative approach carries the advantage that, in the event that the implant must be explanted or exchanged, the retinal tack itself does not have to be removed. The device can be explanted by cutting the silicone ring and removing the electrode array. Removing the retinal tack carries the risk of retinal detachment and, in some cases, proliferation out of the tack hole. Additionally, because no scleral band is used for the Iris II implant, the surgical procedure time is on average 2.5 to 3 hours, which is shorter than that for other artificial implant devices (Table).

The patient wears a pair of glasses fitted with an integrated image sensor that captures information from the environment and translates it into electronic signals. These signals are sent by cable to a pocket processor that turns image information into stimulation commands that are sent wirelessly to the implant. The implant receives signals and generates stimulation currents that are applied to the retina by an array of microelectrodes. The implant is supplied with energy by a wireless radiofrequency link. A primary coil is integrated into the glasses, and a secondary coil is integrated inside the implant.

The external component contains electronics that receive energy, process data, and generate stimulation currents that are delivered to the electrodes by tracks integrated in the plastic film.

This component is sutured on the sclera between the lateral rectus and the superior rectus muscles. 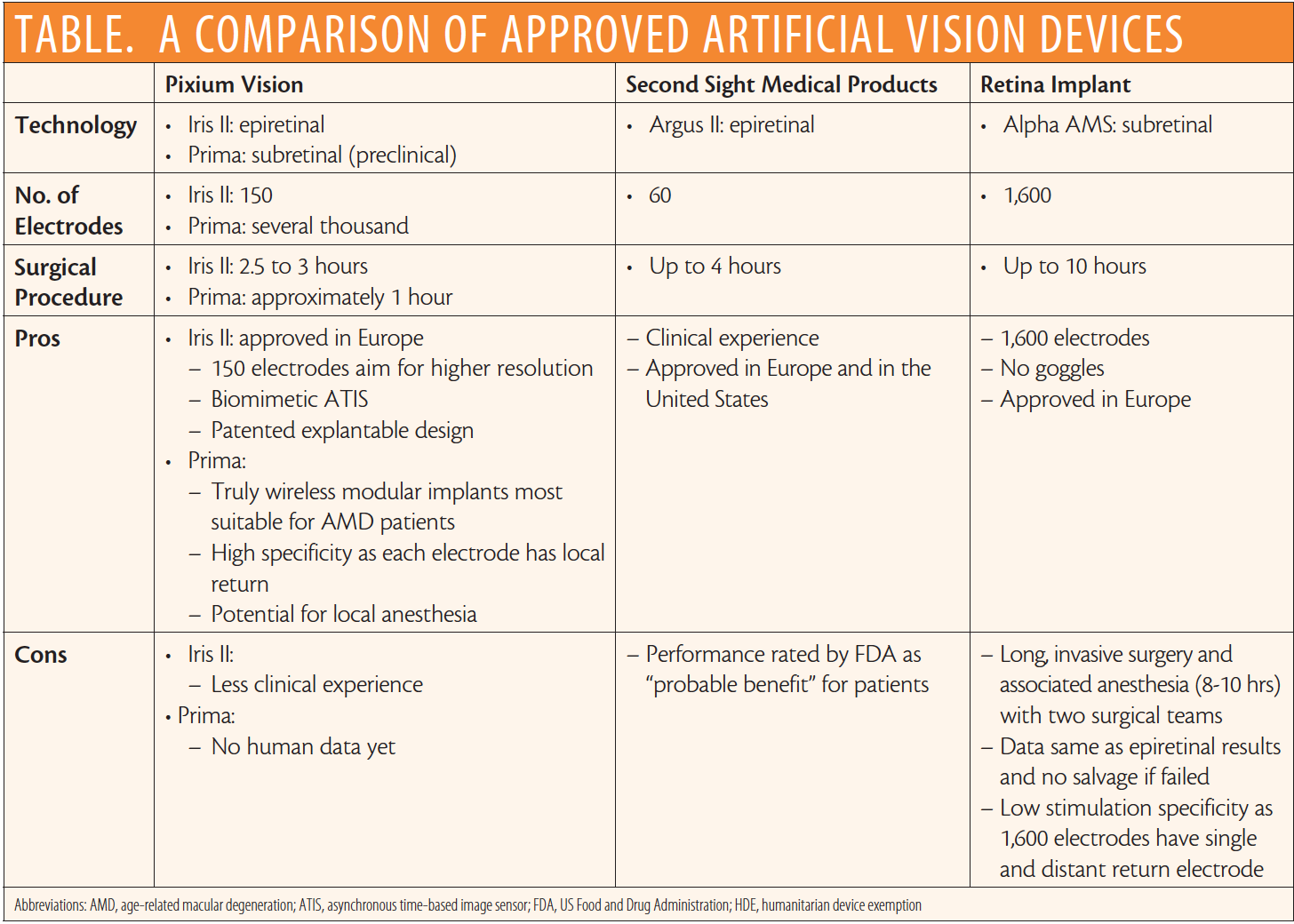 The glasses part of the Iris II bionic vision system contain a biomimetic neuromorphic image sensor. Unlike a normal video camera, this sensor mimics the functioning of a human retina. It captures information from the environment by detecting changes in the visual scene. The Iris II image sensor captures important information much faster than standard cameras, thereby reducing redundant information, and needs less processing power to create retinal stimulation sequences.

One of the most important aspects of any retinal prosthesis surgery is postoperative rehabilitation. At Moorfields Eye Hospital, a team of specialized optometrists will lead patient rehabilitation. The team will help patients to retrain their vision to recognize different types of stimulation as the objects they correspond to and to fine-tune the device with a higher number of electrodes for maximum stimulation. A second team of specialized low vision mobility experts will assist patients with adapting to their home and outdoor environments after retinal implantation surgery. This reeducation process is intensive and extremely valuable because it enables patients to appreciate the new visual world activated by the implant.

Clinical trials with the Iris II system are ongoing (www.clincialtrials.gov NCT02670980 and NCT01864486). Participating patients have reported the ability to localize objects (eg, a ball on a table), to identify whether a staircase goes up or down, to identify a car, a Ferris wheel, and even the Eiffel Tower at night. One patient remarked that, while a cane helps with what is on the ground, the system allows him to orient himself and detect obstacles.

We hope the Iris II retinal implant will be able to offer patients the benefit of resolution higher than simply detecting the outlines of shapes and objects. Researchers at Moorfields are involved in the current multicenter clinical trial of the Iris II system.1 In the trial in which we are participating, patients with RP, cone-rod dystrophy, or choroideremia will receive the implant and will be followed for at least 18 months and up to 36 months. The primary outcome measure is the number of patients with treatment-related adverse events, and secondary outcome measures will include visual acuity and functional assessments such as square localization.1 A minimum of three patients will be enrolled at Moorfields for surgery in 2016, and a total of 10 patients will be enrolled for the whole trial across European centers. After 4 to 5 weeks, the implanted device will be switched on, and then the program of education and vision retraining will be initiated with our low vision specialists. Preliminary results should be available some time between 2017 and 2018.

I will be excited to follow the outcomes of this study over the coming years. This is the next step in the evolution of artificial vision implants, and the Iris II technology is heading in the right direction. In addition to the Iris II epiretinal implant, Pixium Vision is developing a subretinal miniaturized wireless photovoltaic implant platform called the Prima system to address vision loss in patients with AMD. This device has completed preclinical studies and is expected to enter the first human feasibility study in coming months. n

A BROADER VIEW OF THE RETINAL IMPLANT SCENE

The field of retinal prosthesis research has been around for more than
20 years, and in that time several devices have been developed with the aim of restoring vision in patients with inherited diseases of the outer retina. The main article here by Mahi Muqit, PhD, FRCOphth, covers one of these devices, and on page 46 Lyndon da Cruz, MA, MD, PhD, breaks down 5-year results with the Argus II Retinal Prosthesis System (Second Sight Medical Products). Below is a brief snapshot of two other implants: one that is available and one that is in development.

The Alpha IMS subretinal implant (Retina Implant AG) was developed to restore some degree of vision to patients with retinitis pigmentosa and was cleared in Europe in 2013. In March of this year, the company received European regulatory approval for the successor of the Alpha IMS, the Alpha AMS, which has 1,600 pixels (the Alpha IMS had 1,500 pixels).

Like its predecessor, the Alpha AMS does not rely on an external camera but rather is self-contained, using a photodiode system dependent on natural eye movements. The device is made up of a subretinal multiphotodiode array that is implanted beneath the retina in the macular region. Each pixel consists of a light-sensing photodiode that responds to ambient light entering the eye. In essence, natural optical stimuli are replaced by pulsed, light-dependent electrical stimuli, resulting in the perception of artificially triggered light phenomena, or phosphenes.

The product pipeline of Bionic Vision Technologies includes two generations of a suprachoroidal retinal prosthesis (a 44-channel device and a 98-channel device) that consist of a camera attached to a pair of glasses, an externally worn vision processing unit (VPU), and an electrode array implanted behind the retina. The camera captures an image and transmits the data first to the VPU and then to an implant situated behind the ear that then relays the signals to the electrode array either wirelessly or through an external wire. These pulses are intended to trigger the array to stimulate the retina’s remaining cells, resulting in a corresponding perception of patterns of light in the brain. Patients learn to interpret these visual patterns, allowing them to detect shapes of people and objects in their surroundings.

A New Option for Treatment of Noninfectious Uveitis

Changing Your Perspective in the OR

Noninfectious Posterior Uveitis: The Rationale for Steroid Use

Supported through an unrestricted educational grant by Santen.