A case report illustrates the importance of performing a systemic workup on all patients with posterior uveitis.

A 53-year-old man presented with complaints of a temporal shadow in his left eye (OS) for 4 days that was progressively worsening and accompanied by mild eye pain. The patient reported no photopsias or floaters. He had no significant ocular history, and his medical history included nephrolithiasis, gout, migraine, depression, and anxiety, for which he was being treated. He was an active smoker.

• Ocular syphilis can involve any ocular structure and can manifest in many forms.

• Syphilitic uveitis should be treated with a 10- to 14-day course of intravenous penicillin.

• Because of the high rate of coinfection, testing for HIV is crucial in patients with ocular syphilis.

On examination, the patient’s BCVA was 20/20 in the right eye (OD) and 20/40 OS. His pupils were equally round and reactive to light, and there was no relative afferent pupillary defect. Intraocular pressure (IOP) was 12 mm Hg in each eye (OU). Anterior segment examination revealed mild nuclear sclerotic cataract OU and rare anterior chamber cell OS. There were occasional cells in the anterior vitreous OS. No evidence of intraocular inflammation was noted OD. Dilated funduscopic exam OS revealed clear media, a mildly hyperemic disc with mild blurring of the disc margins, small areas of deep retinal hypopigmented lesions measuring about 100 µm to 300 µm scattered throughout the posterior pole, and a semicircular area of deep retinal hypopigmentation nasal to the fovea. Dilated fundus examination OD was unremarkable (Figure 1). 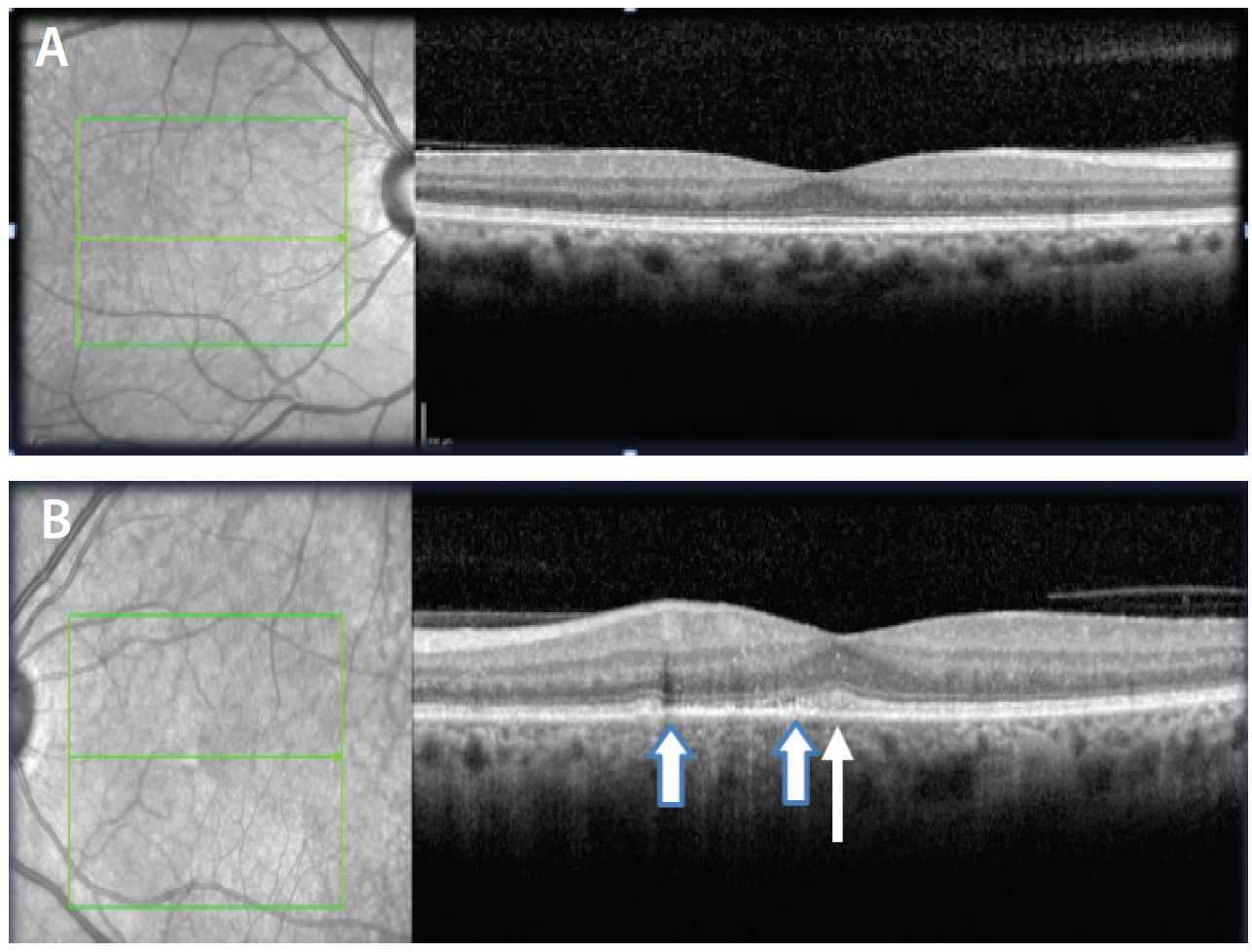 Figure 2. OCT images OD (A) and OS (B) reveal disruption of the EZ nasal to the fovea (area between wide arrows) and thickening of the EZ in the fovea OS (thin arrow).

The patient was initially diagnosed with MEWDS. At a follow-up appointment 2 weeks later, his symptoms were unchanged. The patient was lost to follow-up and was seen 10 months later at the New England Eye Center. At that visit he complained of “sepia tone” vision and said it seemed as though he was looking through cheesecloth.

A thorough history and review of systems was obtained at this time. The patient acknowledged issues with memory over the past year. Additional social history was obtained, and he revealed that he had emigrated from Romania in 1964, and he lived with a monogamous male partner of 25 years. His BCVA was 20/20 OU. He was able to see seven of seven Ishihara color plates OD and one of seven OS. IOP was 12 mm Hg OU. Anterior segment examination did not reveal any inflammation. The anterior vitreous OD was clear, but there was 1+ cell and trace haze OS.

Figure 4. Early (A), mid- (B), and late phase (C) fundus FA OS reveals scattered, punctate areas of hyperfluorescence with late staining of the nasal macula and a hot disc.

The deep retinal lesions were no longer visible at this visit; however, FAF showed persistent punctate areas of hypoautofluorescence, and FA showed persistent areas of hyperfluorescence throughout the posterior pole and a hot disc. Indocyanine green angiography (ICGA) showed diffuse hypercyanescence with scattered areas of blocking secondary to vitritis OS (Figure 5).

At this time, a systemic workup was performed, including angiotensin converting enzyme, lysozyme, rapid plasma reagin (RPR), fluorescent treponemal antibody absorption (FTA-ABS), QuantiFERON-TB, and a chest x-ray. RPR returned positive at a titer of 1:128, and FTA-ABS was also positive. Other testing was unremarkable. An HIV test was ordered and came back negative.

Two months later, the patient’s vision continued to improve subjectively, and the inflammation had completely resolved. He required chronic treatment with difluprednate to control persistent intraocular inflammation. One year later, his visual acuity was 20/50 OS due to posterior subcapsular cataract and an epiretinal membrane. The patient also developed steroid-induced glaucoma for which he underwent tube shunt surgery. His inflammation, IOP, and vision have since remained stable.

Ocular syphilis, known as a great masquerader, can involve any ocular structure and can manifest in many forms. Although uveitis is the most common presentation of ocular syphilis, overall syphilis is a rare cause of uveitis.1 The findings in our patient were consistent with a mild form of acute syphilitic posterior placoid chorioretinitis (ASPPC), which is characterized by grayish-yellow placoid areas at the level of the retinal pigment epithelium (RPE) and outer retina in the posterior pole. OCT may show EZ abnormalities, areas of thickening of the RPE, and/or subretinal fluid.2 FA typically shows early hypofluorescence of the placoid lesion followed by late staining.1

Vision and inflammation typically improve with intravenous penicillin therapy; however, patients may need chronic topical steroids to treat persistent inflammation. Visual prognosis is excellent, with a reported median final visual acuity of 20/25 in patients treated for ASPPC.4 Testing for HIV is critical in these patients, given the high rate of coinfection.5,6

This case demonstrates syphilis as one of the great masqueraders and emphasizes the importance of performing a systemic workup for all patients with posterior uveitis.

6. Browning DJ. Posterior segment manifestations of active ocular syphilis, their response to a neurosyphilis regimen of penicillin therapy, and the influence of human immunodeficiency virus status on response. Ophthalmology. 2000;107(11):2015-2023.

Jordana G. Fein, MD
• retina specialist at The Retina Group of Washington in Fairfax, Va.; cofounder of The International Society for the Advancement of Medical Retina
• financial interest: none acknowledged
• jgorenmd@gmail.com

New Uses of the 7th Character in ICD-10-CM Coding

Choroidal Nevus Growth Over 13 Years: Is It a Problem?