Benefits and limitations of common approaches to managing patients with diabetic macular edema.

Diabetic macular edema (DME) affects an estimated 746,000 Americans.1 Although available treatments can preserve and improve vision for the vast majority of patients, these treatments can be associated with substantial costs and visit burdens; therefore, determining the optimal treatment regimen is critical. Focal laser and intravitreal steroids remain important in the treatment of patients with DME,2-4 but most patients today receive intravitreal anti-VEGF therapy. In this article we discuss the pluses and minuses of common anti-VEGF injection treatment algorithms for patients with DME.

• For eyes with center-involving DME, monthly treatment leads to rapid visual acuity improvement that is maintained for at least 3 years.

• Although PRN treatment leads to gains in visual acuity and a substantial reduction in the number of injections and visits over time, patients still need frequent monitoring.

The phase 3 RISE and RIDE clinical trials5 and the phase 3 VIVID and VISTA trials6 established the superiority of anti-VEGF drugs over focal laser for the treatment of eyes with DME. These pivotal clinical trials were designed to establish treatment superiority over focal laser and were modeled after earlier studies in which intravitreal injections of an anti-VEGF agent were administered monthly for treatment of exudative age-related macular degeneration (AMD).

There are several advantages to treating eyes with center-involving DME with monthly intravitreal injections regardless of the presence or absence of edema. Visual acuity and anatomic data suggest that this fixed treatment regimen leads to rapid visual acuity improvement and that the gain is maintained for at least 3 years. For some patients, visual acuity continues to improve for up to 1 year before stabilizing. The other main benefit of monthly treatment is regression of diabetic retinopathy (DR). With monthly treatment, 35.9% to 47.0% of patients experienced regression of 2 or more steps in DR severity score, and 13.2% to 15.0% had regression of 3 or more steps in retinopathy severity.7-10

Drawbacks to monthly treatment include the financial cost to patients and insurers and substantial investment of time. Patients must dedicate several hours each month to traveling to the office, and family members often share this burden, further increasing indirect costs. In addition, the repeated injections carry a low but real risk of endophthalmitis and other complications related to the injection itself.

In contrast to fixed monthly injections, as-needed (PRN) treatment protocol injections are administered based on the presence of DME. The decision to inject is at the discretion of the physician, who may take into account such factors as changes in visual acuity or persistent or worsening center-involving DME on clinical examination or optical coherence tomography (OCT) imaging.

The Diabetic Retinopathy Clinical Research Network (DRCR.net) Protocol I study11 provides the best data we have on a PRN treatment protocol for patients with DME. In the algorithm used in that study, patients randomly assigned to ranibizumab (Lucentis, Genentech) treatment received monthly injections for 6 months and then continued to receive monthly injections until their visual acuity reached 20/20, until OCT central subfield thickness was less than 250 µm, or until there was a less than 10% change in OCT thickness or less than 5 letter change in visual acuity since the last treatment. Treatment could then be restarted at a subsequent visit if visual acuity dropped by 10 or more letters from baseline, if OCT central subfield thickness was greater than 250 µm, or if DME was judged to be the cause of visual acuity loss.

The Good and the Bad

An advantage of this approach is that eyes have robust visual acuity gains, followed by stability, with a substantial reduction in the number of injections and visits over time. However, patients still need frequent follow-up, particularly early after initiation of treatment to determine whether treatment is required, so issues with visit burden still exist. 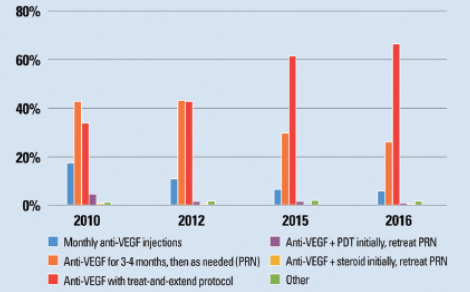 Figure 1. The number of retina specialists using a treat-andextend protocol has been steadily increasing over the past few years.13 Most respondents to the 2016 ASRS Practices and Trends survey would use a treat-and-extend protocol if they themselves had AMD. Graph used with permission of American Society of Retina Specialists.

Based on responses to the 2016 American Society of Retina Specialists (ASRS) Preferences and Trends survey, the number of retina specialists using a treat-and-extend protocol has been increasing over the past 7 years, and most retina specialists would treat their own exudative AMD with a treat-and-extend protocol (Figure 1).13 This strategy has also been used in treatment of patients with retinal vein occlusions14 and patients with DME.15-17 The goal of this treatment regimen is to find the longest amount of time between visits (and therefore the fewest visits and number of injections) at which visual acuity is maintained along with continued resolution or stability of edema.

A treat-and-extend regimen incorporates elements of both monthly and PRN treatment regimens. As with a monthly regimen, the physician administers intravitreal injections at each clinic visit, but, instead of a fixed 4-week follow-up interval, the length of the interval varies based on disease activity. On presentation, eyes are often treated monthly until macular edema resolves or until there is no further improvement in macular edema or visual acuity. As soon as the eye is deemed to have no edema, stable visual acuity, or stable macular thickness on OCT over several visits, a baseline has been established. The treatment interval is then extended by 1 to 2 weeks at a time, as long as vision and macular edema remain stable. If macular edema recurs or the visual acuity decreases, the interval is shortened by 1 to 2 weeks until the eyes return to their baseline (Figure 2).

Figure 2. A 47-year-old patient presented with center-involving DME and visual acuity of 20/50 (top). The patient responded well to initial injections at 4-week intervals with stabilization after four visits, so the visit interval was increased from every 4 weeks to every 6 weeks. When the interval was extended to 8 weeks, the edema returned. The interval was reduced to 6 weeks, and the edema again decreased (bottom).

A treat-and-extend regimen has several potential advantages. Unlike with a PRN schedule, the clinician does not have to wait until macular edema is worse before treating the patient. Chronic macular edema can lead to irreversible vision loss, so preventing recurrence of edema can potentially preserve visual acuity in the long term, although studies are needed to confirm this.

A treat-and-extend regimen can also reduce the number of office visits without sacrificing visual acuity. One retrospective case series compared a visual acuity–guided PRN (VAPRN) protocol with an OCT-guided treat-and-extend (OCTAE) regimen in patients with DME treated with ranibizumab.15 At 1-year follow-up, there was no significant difference in visual acuity (+8.3 letters vs. +9.3 letters) in the VAPRN and OCTAE groups, respectively, although the VAPRN group required fewer injections (5.9 vs. 8.9) than the OCTAE group (P < .001). It is not clear whether these visual acuity and OCT outcomes would be maintained over time.

In another retrospective series, the mean number of injections using a treat-and-extend regimen was 8.8 over a 2-year follow-up period with a mean injection interval of 11 weeks.16 Best corrected visual acuity (BCVA) improved from 0.37 logMAR at baseline to 0.19 logMAR at 2 years, an improvement of 0.18 logMAR (equivalent to +9 ETDRS letters), and 37.5% of participants gained more than 2 lines.

All three intravitreal anti-VEGF injection treatment protocols discussed above can achieve significant visual acuity improvement over the short term; however a treat-and-extend regimen can provide visual acuity benefits similar to those of the other two regimens but with fewer visits and injections. This individualized treatment schedule allows efficient dosing of anti-VEGF therapy, minimizing the amount of time edema is present while requiring the fewest possible injections and patient visits. However, long-term data and the effect of a treat-and-extend regimen on DR severity are not well established.

Anti-Integrin Therapy in Treatment of DME

From Trials to Treatment: Real World Applications in Medical and Surgical Retina (Part 1 of 3)