Management of this condition can be challenging, especially in chronic cases.

Central serous chorioretinopathy (CSC) is an idiopathic disorder characterized by serous retinal detachment and retinal pigment epithelial detachment (PED). Changes are most often confined to the macula and are associated with leakage of fluid through the retinal pigment epithelium (RPE) into the subretinal space. Patients with CSC often experience loss of central vision, central scotoma, micropsia, metamorphopsia, decreased color vision, and abnormalities in contrast sensitivity. Visual acuity may be only moderately reduced, and there may be a hyperopic shift.1

• CSC is an idiopathic condition, the pathophysiology of which is poorly understood, but several possible vascular causes have been proposed.
• Focal laser and PDT are current standards of care for chronic CSC, but micropulse laser is a good alternative in instances in which verteporfin is not available.
• Some systemic treatments may benefit patients with chronic CSC.

This article reviews some of the basics about this condition, including associated risks, pathophysiology, and available treatment options.

Numerous risk factors have been associated with CSC, the most consistent being glucocorticoid use. In a case-control study of 312 patients with CSC, Haimovici et al reported an odds ratio of 10.3 for corticosteroid use.2 In another study of 230 patients, Tittl and colleagues reported an odds ratio of 3.17, supporting this association.3 CSC is also associated with elevated levels of endogenous corticosteroids, as in Cushing syndrome.4

Given the strong association between CSC and steroids, their use should be avoided whenever possible. Furthermore, patients with CSC should be questioned about their use of all forms of steroids, including products that may contain steroids (eg, skin creams, joint injections, nasal sprays, inhalants, and other commonly overlooked forms of glucocorticoid), as these could be contributing factors.

Pregnancy is a recognized risk factor for CSC. Plasma cortisol levels are elevated during pregnancy, particularly during the third trimester.5 Pregnancy-associated CSC tends to present as white subretinal exudation that usually resolves spontaneously after delivery.6

Another risk factor traditionally associated with CSC is psychological stress and type A personality. Yannuzzi’s well-known study of CSC and personality types supports this association.7 Other associations includes systemic hypertension, gastroesophageal reflux disease, and the use of alcohol or sympathomimetic agents, although this last requires further confirmation.2,8,9

The pathophysiology of CSC is poorly understood. Some postulate that a focal increase in permeability of the choriocapillaris overwhelms the overlying RPE, producing serous PEDs and subretinal fluid.10 Guyer and colleagues suggested that the pathogenesis of CSC may be choroidal vascular hyperpermeability with or without associated active pigment epithelial leaks or PED.11 An alternative theory suggests that CSC results from ion pump dysfunction in the RPE, resulting in reverse fluid movement in a chorioretinal direction.12

In 2013, Warrow et al reported a series of patients with RPE changes in one or both eyes that resembled those frequently seen in the fellow eyes of patients with unilateral CSC.17 The authors suggested that these RPE changes occurred in the absence of serous detachment but were related to a spectrum of choroidal abnormalities seen typically in CSC eyes. The term pachychoroid pigment epitheliopathy (PPE) was introduced to describe this entity, which these authors considered to be a forme fruste of CSC.

The authors demonstrated that the RPE changes in PPE could be attributed to foci of choroidal thickening, as seen on OCT, and choriocapillaris hyperpermeability, as seen on ICGA. They also showed that some changes had developed directly over large, dilated choroidal vessels directly external to the RPE/Bruch membrane complex. Shortly thereafter, pachychoroid features were described in eyes with a wider spectrum of disease, including CSC, pachychoroid neovasculopathy (PNV), polypoidal choroidal vasculopathy (PCV), and focal choroidal excavation.18,19

En face OCT imaging in a cohort of patients with pachychoroid disease revealed that focal choroidal thickening could be attributed to pathologically dilated Haller layer veins (referred to as pachyvessels), and, where tissue manifestations occurred at the level of the RPE, paradoxical thinning of the inner choroid (choriocapillaris and Sattler layer) could be appreciated, resulting in anterior displacement of pachyvessels into close proximity to Bruch membrane.

Some authors have proposed that pachychoroid could be an inherited condition with potentially dominant transmission mode. Weenink and colleagues found CSC-like pathology in 14 of 27 (52%) families of patients with chronic CSC. Only a small percentage of affected relatives reported symptoms.22 In a prospective observational study, Lehmann et al found that 50% of eyes from first or second-degree relatives of five patients with CSC had thick choroids.23

Acute CSC is typically a self-limited process. Recovery of visual acuity typically occurs within 1 to 4 months, coinciding with reattachment of the neurosensory retina, with few recognized visual sequelae.24 Recurrences are common, happening in approximately 30% to 50% of patients by 1 year.25 Patients with frequent recurrences or with chronic neurosensory retinal detachment may develop RPE atrophy and neurosensory retinal changes that result in permanent loss of functional vision. The terms acute and chronic (fluid persisting > 3 months) will be used in this discussion.

Observation is the standard initial management in patients with acute CSC, but there are instances when treatment may be desirable. These instances include CSC with persistent macular subretinal fluid (SRF) or reduced visual acuity, cases in which rapid recovery of vision is required for vocational reasons, and those in which untreated CSC has resulted in a poor visual outcome in the fellow eye.

Other types of laser delivery may also be efficacious in treatment of CSC. Micropulse laser delivery mode (Figure) diminishes the risk of iatrogenic thermal damage because it does not induce visible laser burns and can therefore be used to treat subfoveal or juxtafoveal focal and diffuse leaks.27 Photodynamic therapy (PDT) with the light-activated drug verteporfin (Visudyne, Bausch + Lomb) has been effectively used to treat chronic CSC.28 Potential advantages of micropulse laser over PDT include lower cost and no adverse events associated with PDT infusion (eg, transient reduction in macular function, choroidal nonperfusion, RPE atrophy, and CNV). 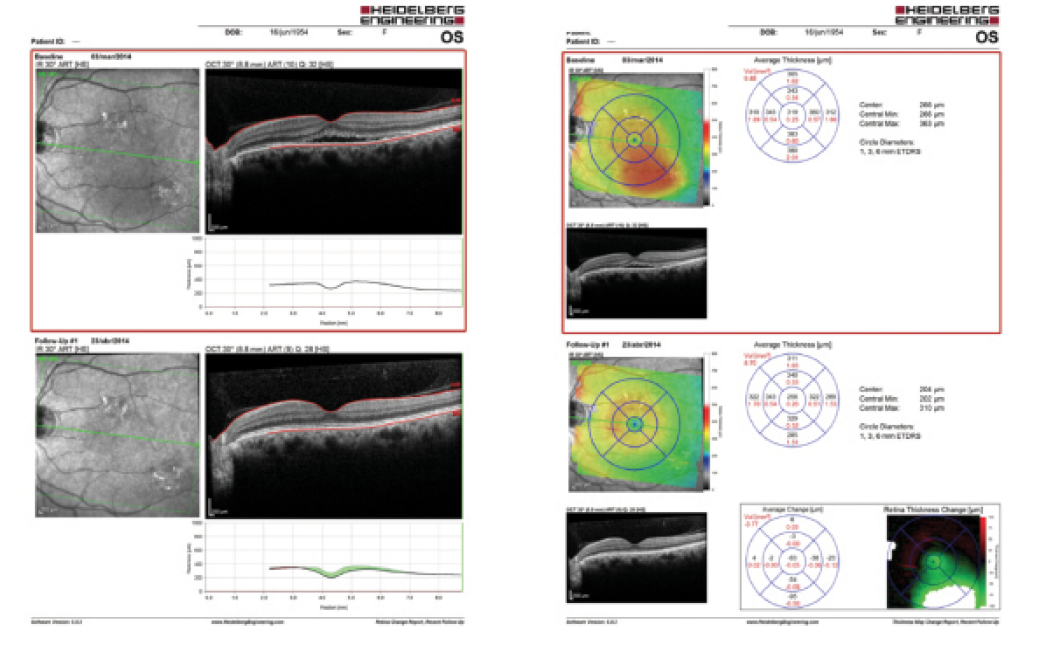 Figure. The left eye of a patient with CSC before (top images) and after (bottom images) micropulse laser treatment. The subretinal fluid disappeared quickly after treatment, and the external retinal layers normalized within a few weeks.

Myriad systemic medications have been investigated as treatments for CSC, including rifampin (Rifadin, Sanofi Aventis), helicobacter pylori triple treatment, carbonic anhydrase inhibitors, finasteride, beta blockers, antioxidants, and aspirin. As a whole, these have had poor results.30

Mineralocorticoid receptor antagonists appear to be effective in patients with chronic or recurrent CSC, demonstrating anatomic and functional improvement. Bousquet et al compared spironolactone 50 mg every day for 30 days versus placebo in patients with persistent SRF for at least 3 months.31 These authors found a statistically significant reduction in SRF and reduction of subfoveal choroidal thickness in spironolactone-treated eyes compared with placebo. No significant changes were observed in BCVA, and no complications related to treatment were reported.31

Schwartz and colleagues compared the efficacy and safety of the aldosterone antagonist eplerenone 50 mg/day (Inspra, Pfizer) in patients with chronic CSC versus placebo.32 The main outcome measure was change in SRF at 3 months. Secondary outcomes included choroidal thickness and BCVA changes. In this study, eplerenone was not superior to placebo.32 Spironolactone is known to have a higher mineralocorticoid receptor affinity than eplerenone, along with a higher incidence of side effects, including hyperkalemia, gynecomastia, reduced libido, and menstrual changes.30

Gramajo et al reported a therapeutic benefit of melatonin treatment for chronic CSC. These authors compared melatonin 3 mg three times per day (9 mg/day) in 13 patients versus placebo in five patients. At 1-month follow-up, BCVA significantly improved in 87.5% of treated patients (seven of eight patients) (P < .05). All patients showed significant reduction in CMT (P < .01), and three patients (37.5%) exhibited complete resolution of SRF. No significant side effects were observed, and no changes in BCVA or CMT were noted in the placebo group.33

Anti-VEGF agents are not considered first-line treatments for either acute or chronic CSC because aqueous VEGF levels are not elevated in these patients. Anti-VEGF therapy is, however, useful in patients in whom secondary CNV develops.26

Advances in imaging techniques have improved our understanding of the choroid and choroidal disorders. Management of CSC is challenging, particularly chronic CSC. Although focal laser and PDT are current standards of care in chronic CSC, micropulse laser is a good alternative in instances when verteporfin is not available. Some systemic treatments may benefit patients with chronic CSC by decreasing the rate of therapy-induced complications.

Digital 3D Retina Surgery: Are We at the Precipice of a New Standard of Care?

This CME activity is supported by an educational grant from Regeneron Pharmaceuticals, Inc.