A unique presentation of bilateral posterior uveitis, along with unusual laboratory test results, made for a noteworthy case.

Posterior uveitis may arise from a variety of etiologies. Infectious laboratory tests are often a key component of the initial workup to rule out the common masquerade infectious etiologies that may manifest in a multitude of ways from the anterior to the posterior segment. In this article, we present a case in which an unexpected laboratory result created a treatment dilemma.

• A patient presented with a 2-day history of progressively worsening vision, tested positive for tuberculosis (TB), and showed a robust initial response to steroids with significant improvement in vision and anatomy.

• The marked improvement after oral prednisone treatment alone without antitubercular treatment led to a presumed diagnosis of VKH disease.

• When considering initial treatment regimens for patients with similar findings and positive TB laboratory results, each situation must be examined carefully to determine the likelihood and pretest probability that the ocular findings may represent a presumed ocular TB process.

A 55-year-old black woman with a medical history of hypertension and obesity presented with a 2-day history of progressively worsening vision, with her right eye (OD) worse than her left eye (OS). She did not report eye pain, redness, or floaters, but did note a few days of mild upper respiratory infection symptoms approximately 1 week prior to presentation. At the onset of her visual symptoms, she had had a mild headache and periorbital pain that had mostly resolved by the time of her presentation. She had no other significant ocular, surgical, or medication history, and her family history was notable only for a sister with sarcoidosis. Her blood pressure was 162/92, and a CT scan of her head and a chest x-ray were unremarkable.

On presentation, her BCVA was 20/400 OD and 20/100 OS. Her pupils were equal, round, and reactive to light with no afferent pupillary defect. Visual fields were full to confrontation. Her IOP was 18 mm Hg in each eye (OU). Anterior segment examination was remarkable only for trace nuclear sclerotic cataracts OU. Of note, there was no anterior chamber cellular reaction, flare, keratic precipitates, posterior synechiae, or evidence of active or chronic intraocular inflammatory processes.

Dilated fundus examination revealed clear media without inflammation OU and numerous deep, discrete, and patchy yellow lesions throughout the posterior pole with irregular borders and multiple areas of distinct retinal elevation OU (Figure 1). The optic nerves were noted to be hyperemic OU without significant elevation, hemorrhage, or obscuration of vessels. Of note, there was no evidence of peripheral pathology or retinal vasculitis. OCT imaging showed numerous areas of intraretinal and subretinal fluid pockets of varying size with notable retinal and choroidal undulation through the macula (Figure 2). Fluorescein angiography showed multiple irregular patchy and pinpoint areas of hyperfluorescent foci throughout the posterior pole with leakage and distinct pockets of pooling in the later frames (Figure 3). 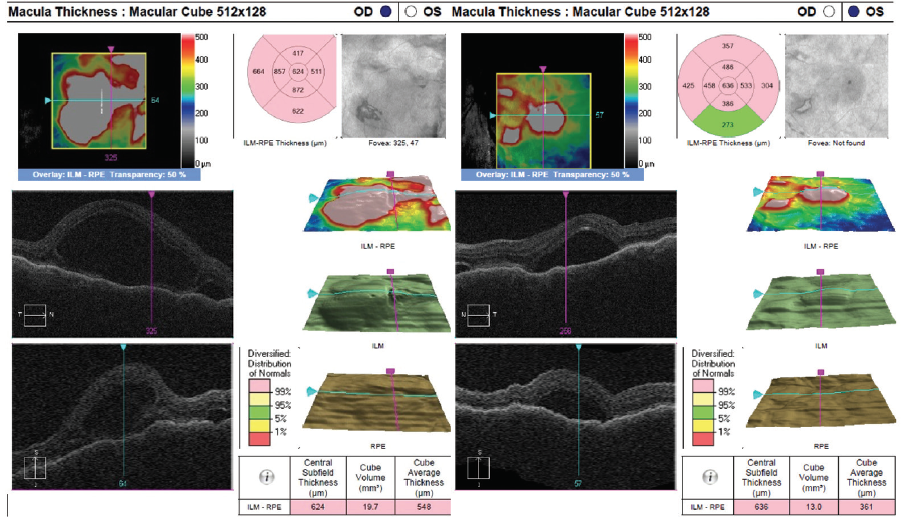 Figure 2. OCT shows multiple pockets of intraretinal and subretinal fluid with undulation of the retina and choroid OU on initial presentation.

Figure 3. Fluorescein angiography shows multiple irregular areas of hyperfluorescent foci throughout the posterior pole with leakage and pooling in the later frames.

Rapid HIV testing was negative, and initial infectious laboratory evaluation with syphilis screening, Lyme titers, and quantiferon-gold and T-spot TB tests were all pending. The initial suspicion was that these findings represented a disease process similar to VKH disease. Laboratory tests were negative for syphilis and Lyme disease. However, quantitative-TB and T-spot tests were positive.

Two chest x-rays, were read as normal. Upon presentation, she underwent CT imaging of her head, which was also unremarkable. She did not undergo a chest CT scan.

The patient underwent consultation with the infectious disease department, which could not definitively conclude whether her ocular findings were evidence of extrapulmonary TB. Of note, their workup did not reveal any evidence of disseminated TB on pulmonary or neurologic imaging. The department recommended initiation of antitubercular treatment (ATT) or, a minimum, latent TB treatment, which the patient refused. Despite the positive laboratory results—and given the clinical findings, lack of intraocular inflammation, and low pretest probability of presumed ocular TB in a nonendemic area—the patient was started on high-dose oral prednisone with plans for close monitoring, per the recommendation of uveitis specialist Brian K. Do, MD. 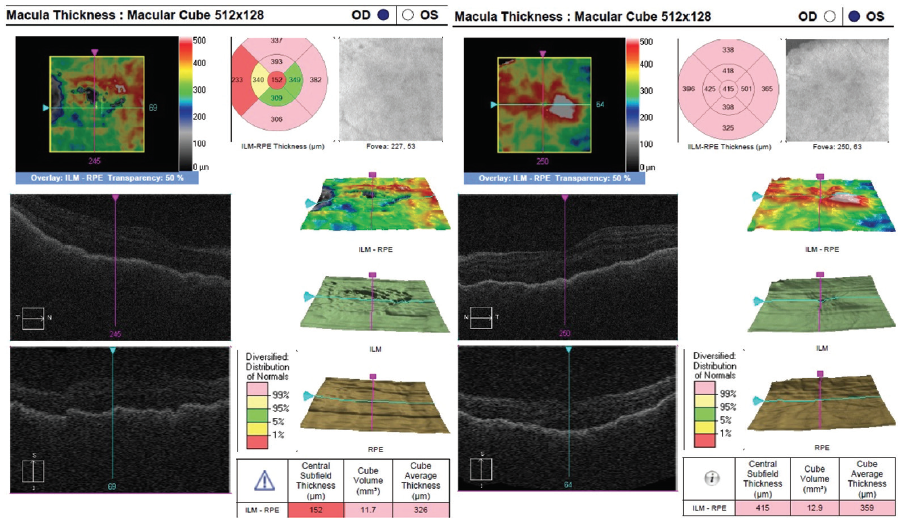 The patient showed a robust initial response to steroids with significant improvement in her vision and anatomy. Within 1 week, her VA had improved to 20/100 OD and 20/70 OS. Fundus examination showed improvement with less defined lesions (Figure 4), and OCT showed significant reduction in fluid (Figure 5). After 1 month of treatment, her vision had improved to 20/50 OD and 20/40 OS, with further improvement seen on fundus findings (Figure 6) and near complete resolution of fluid on OCT (Figure 7). Continued improvement was seen 6 weeks after steroid therapy was initiated (Figure 8 and Figure 9). The marked improvement in structure and function with oral prednisone treatment, without ATT treatment, led to a presumed diagnosis of VKH disease. 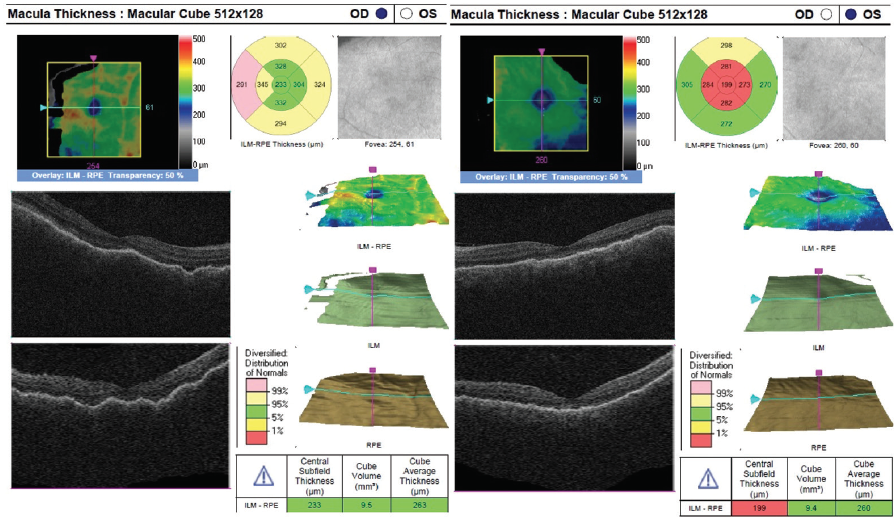 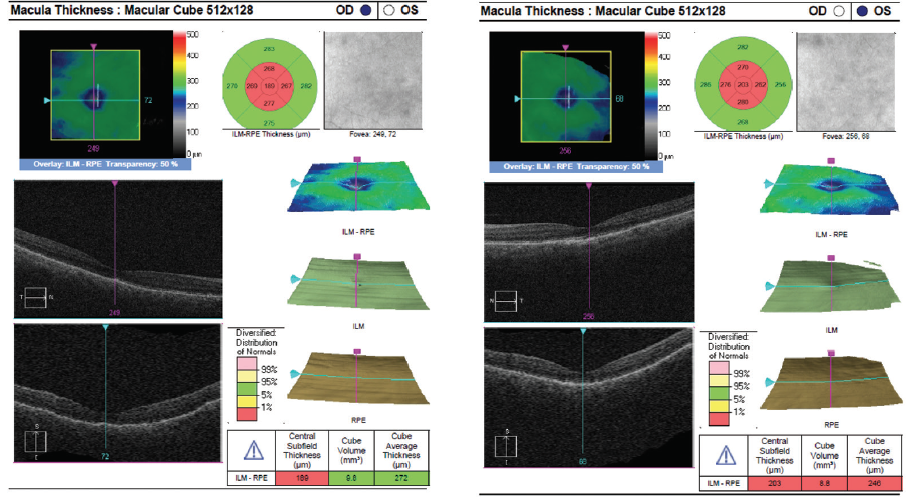 VKH disease is, classically, a chronic bilateral granulomatous intraocular inflammatory process that presents clinically in four phases. The prodromal phase is characterized by several days of mostly extraocular systemic symptoms similar to a flu-like illness, which may manifest with symptoms such as fevers, headaches, neck stiffness, and auditory symptoms.2 Ocular symptoms may follow and may include periorbital pain and photophobia. The acute uveitic phase follows the prodromal phase and is characterized by an acute bilateral granulomatous uveitis in up to 70% of patients. Subretinal fluid, retinal edema, choroidal thickening, exudative retinal detachments, and optic disc edema and hyperemia are the most typical ocular findings.3 The convalescent phase that follows may last for weeks to months and is notable for depigmentation of the choroid as well as extraocular depigmentation manifesting as vitiligo and poliosis.4 Finally, the chronic recurrent phase is marked by recurrent episodes of granulomatous uveitis.3

Systemic steroids are the most common treatment during the acute uveitic phase of VKH disease, often with transition to immunomodulatory treatment depending on the clinical picture and response to steroids.

In this case, the patient responded well to high-dose steroids, but the concomitant positive TB laboratory results posed an initial treatment dilemma regarding both the proper treatment course and most likely diagnosis. As outlined in the revised diagnostic criteria for VKH disease, there can be no clinical or laboratory evidence suggestive of any other ocular disease.5 This criterion made diagnosing VKH disease in this patient more difficult in the context of her positive TB laboratory testing results. However, ocular TB is often a presumed diagnosis, taking into consideration clinical findings, laboratory and imaging testing, endemicity, and response to ATT trial. In nonendemic areas, Quant-TB testing has a low positive predictive value in determining whether ocular inflammation is related to TB in low pretest probability patients.6

This case demonstrates a unique presentation of a bilateral posterior uveitis in which the results of the initial laboratory workup created a diagnostic and treatment dilemma. The patient’s history of prodromal symptoms with development of her examination, OCT, and fluorescein findings were most consistent with a VKH disease–like process.

When considering initial treatment regimens for patients with similar findings and positive TB laboratory results, each situation must be examined carefully to determine the likelihood and pretest probability that the ocular findings may represent a presumed ocular TB process. Working in conjunction with infectious disease specialists can help determine the role of systemic steroids, ATT, or both in the care of such patients.

Digital Viewing Systems Bring Benefits to the OR