Research suggests that this branch of complementary medicine may hold promise.

Investigators have examined acupuncture for the treatment of dry eye disease,1-6 glaucoma,7,8 retinitis pigmentosa,9 and age-related macular degeneration (AMD).10 I (D.K.D.) can trace my own interest in acupuncture’s potential ophthalmic indications back to 2004. After getting my department chair’s blessing to investigate the matter, my first step was to become a licensed acupuncturist through coursework at UCLA. Next, I founded the Center for Integrative Eye Care at the University of Pittsburgh. Currently, my colleagues and I are conducting a pilot study of acupuncture for the treatment of dry AMD.

• The roots of acupuncture are ancient, but its mechanism of action is unclear.

• Early results from a small pilot study suggest that this form of complementary medicine may hold promise for the treatment of dry AMD.

The roots of acupuncture are ancient. It is thought to have originated in China more than 3,000 years ago,11 and texts written during the Ming dynasty (1368–1644) outlined the foundations of the practice.12

Treatment involves inserting slender (0.12- to 0.35-mm) needles into the skin at specific points. In a typical session, the practitioner places needles in a set of acupoints that match a therapeutic goal. There are hundreds of acupoints in the body.

Acupuncture’s mechanism of action is unclear, but several hypotheses have been proposed. Treatment has been shown to decrease proinflammatory cytokines, suggesting applications for chronic inflammatory conditions such as dry eye disease.13,14 Acupuncture has also been found to reduce pain,15,16 increase blood flow to organs,17 and modulate the sympathetic nervous system. Electrically stimulating acupoints using needles connected to electrodes has been shown to enhance wound healing.18

When it is performed by physicians, acupuncture is relatively safe, but patients should be informed of the potential for adverse effects. Most of these are mild and transient. They include needling pain and bleeding or bruising at the needle site. 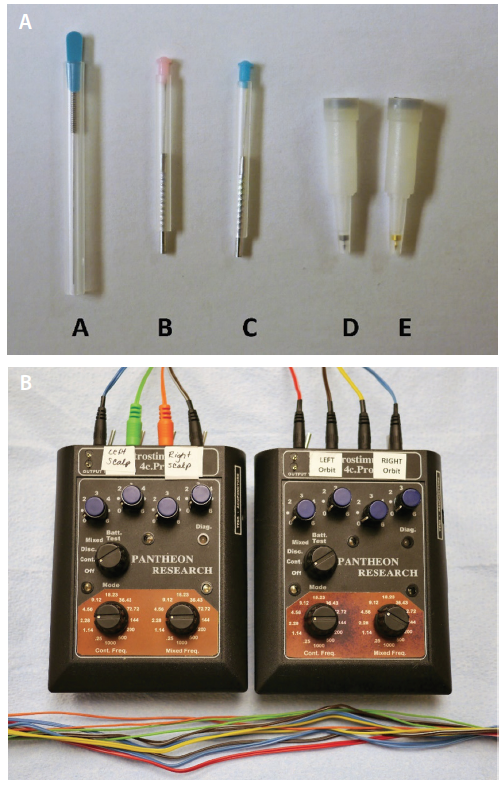 Figure 1. Examples of types of acupuncture needles (A). Electrodes used in acupuncture therapy (B). 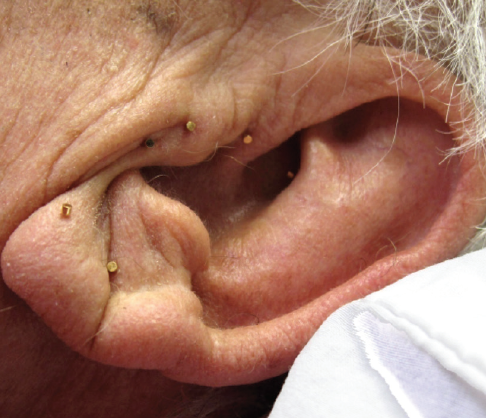 Our pilot study of acupuncture treatment for dry AMD at the Center for Integrative Eye Care at the University of Pittsburgh has enrolled 10 patients. Each study participant underwent 10 acupuncture treatments within a 20-week period. Treatment involved insertion of fine needles in the hairline, scalp, and orbis (Figure 1A). The needles were connected to electrodes and stimulated with electric current for 30 minutes (Figure 1B). Gold semipermanent ear studs were also placed in select acupoints on the ears (Figure 2). The needles were removed at the end of the treatment session, but the semipermanent ear studs remained in place; only those that fell out were replaced at subsequent treatment sessions. Patients were given handled magnets, which they used to stimulate the ear studs between treatments.

Baseline testing included VA, color and contrast sensitivity, a quality-of-life survey, complete slit-lamp and dilated fundus examinations, and OCT. Testing was repeated throughout the study and follow-up period. Patients were monitored for 6 months after the completion of acupuncture treatment. No sham acupuncture group was included.

We are currently collecting 6-month data on the last of these patients, after which we will commence data analysis. A few of the patients have experienced dramatic improvement, a few achieved minimal improvement, and some had no improvement. Importantly, acupuncture did not worsen anyone’s condition.

Traditionally, practitioners of Western medicine have been skeptical of Eastern medicine, but recognition of integrative medicine’s power and place is growing ever so slowly in the United States, as evidenced by the establishment of the National Center for Complementary and Integrative Health at the US National Institutes of Health. Acupuncture’s mechanisms of action are still poorly understood, but they may lie in decreasing inflammation and the sensation of pain through molecular pathways.

Solid proof of acupuncture’s efficacy remains elusive because of the small number of randomized clinical trials, small sample sizes in studies, and lack of true negative controls. Few randomized clinical trials have used sham acupuncture treatment as a negative control, and it has been argued that sham acupuncture treatment itself can produce physiologic changes and thus cannot serve as a placebo control.22,23 Nevertheless, acupuncture’s relative safety and patients’ growing willingness to explore complementary medicine make the practice worth studying for the treatment of ophthalmic conditions. Our pilot study is small, and the results we have shared are early. That said, a positive development in the treatment of patients with dry AMD would be welcome.

Traditional Chinese Medicine (TCM) provides a systematic and holistic approach to health and disease that has maintained its allure for modern scientific research. Within TCM, the principles of yin and yang represent countervailing and complementary aspects of physiology that are related, respectively, to inner and outer, contraction and expansion, dark and light. Practitioners diagnose imbalance and design therapeutic interventions based on ancient principles developed empirically over thousands of years. Treatment is individualized based on the patient’s constitution as well as signs and symptoms. For this reason, the application of clinical research principles to TCM is a challenge.

Eastern philosophy informs the principles of TCM. In a foreword to a translation of the I Ching, or Book of Changes, Carl Jung wrote, “The ancient Chinese mind contemplates the cosmos in a way comparable to that of the modern physicist, who cannot deny that his model of the world is a decidedly psychophysical structure.”1

Jung’s statement alludes to the Heisenberg uncertainty principle. It is worth noting that Niels Bohr, who won the Nobel Prize for physics in 1922, adopted the familiar dark-light yin-yang symbol, called the taichi or taijitu, and the motto Contraria sunt complementa (opposites are complementary) for his family crest (Figure).2 Bohr saw echoes of Eastern philosophy in the complementary opposites inherent in quantum mechanics. As opposed to the causal view of events that underlies Newtonian physics, the synchronistic world view of Eastern philosophy resembles modern physics in its rejection of causality: Both systems understand the universe as a constellation of concomitant events in order to elicit meaning from coincidence.

Clinical research today has more in common with classical than modern physics. We clinicians examine the effectiveness of a specific treatment on a single disease entity in isolation (ie, we study cause and effect). A more holistic view might seek to discover all the determinants of a successful outcome in real time. We certainly adopt a more synchronistic point of view in our practical management of patients, for we recognize that satisfaction and success depend not only on the objective outcomes of surgery but also on the expectations we set, the office environment we create, and the quality of the human interaction our clinic staff provides.

In the future, we may be able to expand our notions of safety and effectiveness to encompass the whole patient experience of disease and health. The addition of patient-reported outcomes to clinical research projects represents a step in this direction, but current questionnaires tend to be quantitative and directed rather than qualitative and open-ended, thereby limiting their scope. It remains a challenge for ophthalmic clinical research to recognize and accept the significance of psychosocial factors in outcomes.

21. Witt CM, Pach D, Brinkhaus B, et al. Safety of acupuncture: results of a prospective observational study with 229,230 patients and introduction of a medical information and consent form. Forsch Komplementarmed. 2009;16(2):91-97.

It Takes a Planet

The Scoop on Anti-Integrin Therapy for DME

Selecting the Right Tools for the Job