Clinical research teams are working toward a treatment for Stargardt disease. How far have they come?

Autosomal recessive Stargardt macular dystrophy (STGD1) is the most common form of inherited macular degeneration, affecting roughly in 1 in 10,000 people. It results from mutation in the ATP-binding cassette, subfamily A, member 4 (ABCA4) gene, which leads to the formation of lipofuscin in the retinal pigment epithelium (RPE).

• Stargardt macular dystrophy is the most common form of inherited macular degeneration, but there are no treatments available for it.

Juvenile and early-adult STGD1 usually occurs in patients aged 8 to 25 years; late-adult onset STGD1 may occur in older adults. Patients develop irreversible vision loss due to atrophy of the macular RPE and loss of photoreceptors. Patients with early disease onset have worse visual outcomes than those with later onset. 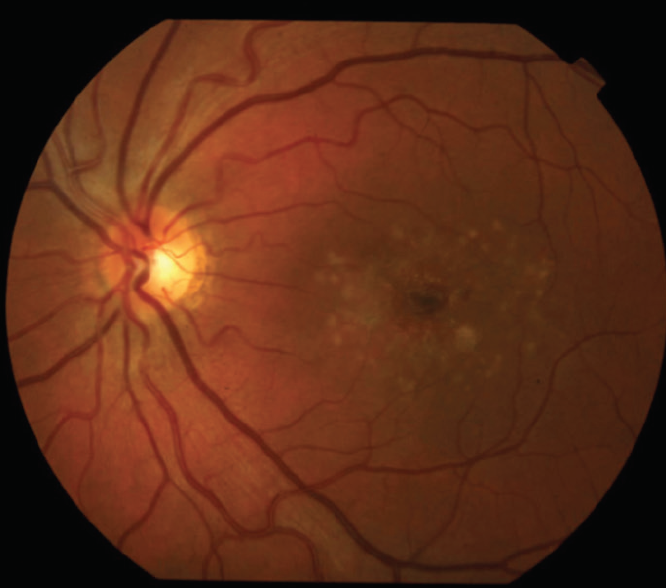 Figure 1. A fundus photo of a patient with STGD1 demonstrates atrophic macula with a beaten-bronze appearance and surrounding yellow flecks extending outward from the fovea.

Accumulation of lipofuscin in the RPE, a hallmark of STGD1, causes a pattern of yellowish elongated lesions or flecks that extend outward from the macula; it has been proposed that these are degenerated photoreceptor cells (Figure 1).1-3 However, presentation is heterogeneous: Juvenile and early-adult STGD1 have varying distributions of flecks, degrees of macular atrophy, and progression. Late-onset STGD1 usually presents with perifoveal atrophy with preserved foveal function and structure that subsequently degenerates in later adulthood.

On funduscopic examination, patients may demonstrate an atrophic or bull’s-eye appearance in the macular region, which may be more apparent on fundus autofluorescence imaging. The diffuse accumulation of lipofuscin material results in the classic dark, or silent, choroid seen on fluorescein angiography due to masking of choroidal fluorescence.

The Progression of Atrophy Secondary to Stargardt Disease (ProgStar) studies are ongoing evaluations documenting the natural history of STDG1 in more than 200 patients at multiple clinical sites. Investigators in the studies have noted that change in BCVA over 12 months is minimal and varies depending on baseline VA. Consequently, change in BCVA has been determined not to be a sensitive 1-year outcome measure.4 Researchers are assessing the possibility of using microperimetry as a more accurate functional outcome measure for future clinical trials.5 In ProgStar, both fundus autofluorescence and OCT are being assessed as anatomic endpoints for progression of atrophy (Figure 2).6,7 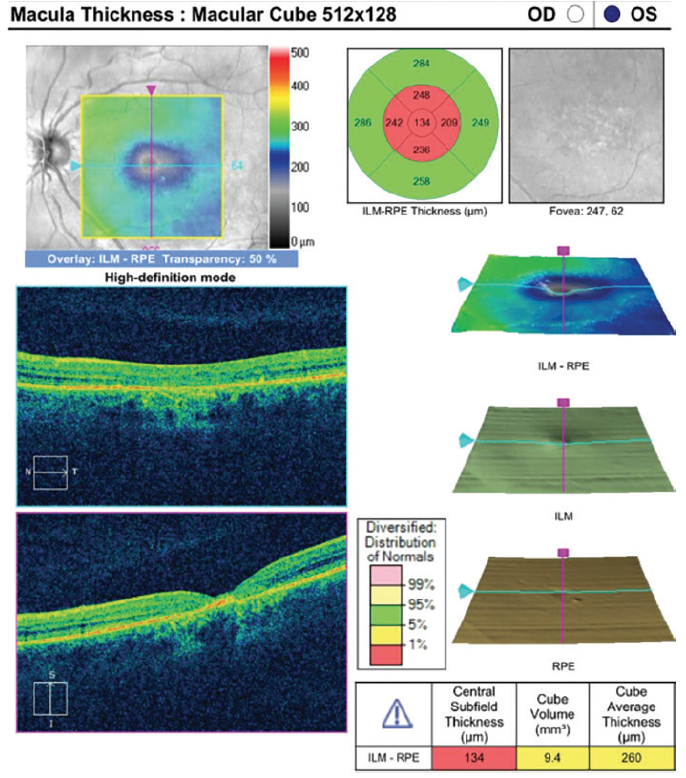 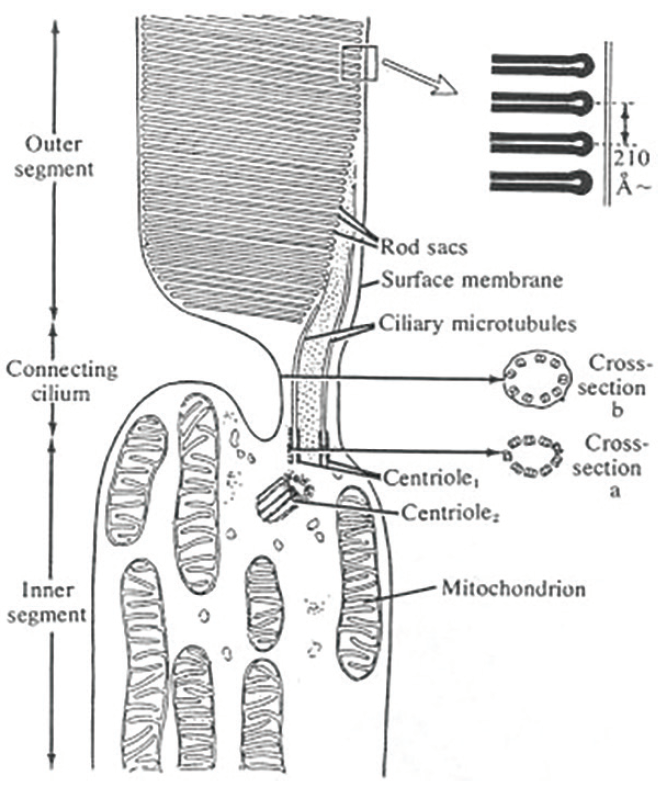 Figure 3. Diagram of a rod cell. The outer segment contains membranous discs. ABCA4 encodes for a photoreceptor outer segment rim protein, a flippase, which has the function of transporting visual cycle chromophore inside the disc out to the cytoplasmic surface.

ABCA4 acts as a membrane transporter for the recycling of chromophores during the visual cycle. Without its functional transporter, vitamin A byproducts, or dimers (bisretinoids, some of which include A2E and ATR-dimer), accumulate in the RPE after phagocytosis of the photoreceptor outer segments. Vitamin A dimers are toxic to cultured RPE cells, and they are thought to play a significant role in lipofuscin formation and subsequent retinal degeneration in STGD1 (Figure 3).8,9

There are no commercially available treatments for STGD1. This article reviews investigational therapies now in clinical trials, including visual cycle modulators that aim to reduce accumulation of vitamin A dimers, complement inhibitors, gene therapy, and stem cell therapy.

The rate-determining step in vitamin A dimerization is the cleavage of a C20 carbon-hydrogen bond of the retinaldehyde-PE Schiff base.10 Replacing the C20 hydrogen atoms of vitamin A with deuterium atoms (ie, C20-D3-vitamin A) renders this bond more difficult to cleave and impedes vitamin A dimerization. Studies in mice have investigated whether slowing the intrinsic reactivity of vitamin A to dimerize could slow lipofuscin formation in the RPE and could thus delay changes associated with development of human STGD1.11,12

Preclinical studies have supported the development of the oral once-daily C20-D3-vitamin A molecule ALK-001 (Alkeus Pharmaceuticals). A phase 1 trial (NCT02230228) assessing the safety and pharmacokinetics of this compound in healthy volunteers has been completed. The phase 2 TEASE study, a multicenter double-masked, randomized, placebo-controlled trial (NCT02402660), will enroll 50 patients. The trial is estimated to be completed in December 2021. 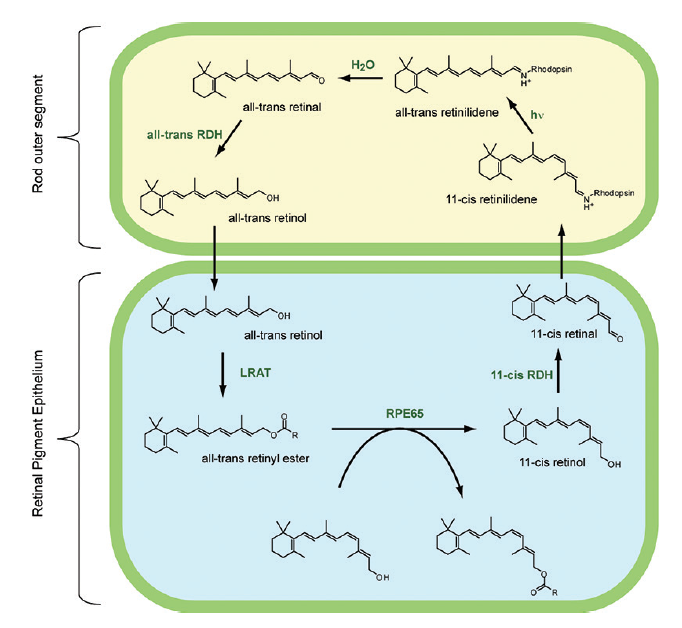 Figure 4. The visual cycle refers to an enzymatic process that takes place in the outer retina photoreceptors and RPE. Photoreceptors use 11-cis-retinal, which binds to opsins to form visual pigments such as rhodopsin or cone opsins. When light strikes rhodopsin in the rod outer segments, 11-cis-retinal is converted to its all-trans-retinal isomer. This, in turn, activates the opsin and initiates a signal transduction cascade, closing a cyclic GMP-gated cation channel, and hyperpolarizing the photoreceptor cell. In the visual cycle, the all-trans-retinal must be converted back to 11-cis-retinal via a series of steps catalyzed by enzymes, including retinol dehydrogenases (RDH), which catalyze reduction and oxidation reactions, as well as lecithin retinol acyltransferase (LRAT) and retinoid isomerohydrolase (a 65-kilodalton protein encoded by the RPE65 gene), both of which are located in the RPE.

Emixustat HCl (ACU-4429, Acucela) is a small nonretinoid derivative of retinylamine that affects the visual cycle. It inhibits retinoid isomerohydrolase (sometimes referred to as “RPE65” because it is encoded by the RPE65 gene), thus reducing the conversion of all-trans-retinyl ester to 11-cis-retinol and preventing accumulation of A2E (Figure 4). Data from a phase 1 study showed that the drug was well-tolerated up to 75 mg with expected dose-dependent suppression of scotopic electroretinogram in healthy patients.13 Emixustat was initially developed as an investigational agent with the aim of slowing the progression of geographic atrophy in age-related macular degeneration (AMD), but a phase 2b/3 trial failed to meet its primary endpoint.14 The compound is now being assessed as a potential treatment for STGD1. A phase 2a study (NCT03033108) in 23 patients has been completed, but no results have been posted. A phase 3 multicenter, randomized, double-masked, placebo-controlled study (NCT03772665) is enrolling 162 patients with macular atrophy secondary to STGD1.

In a mouse model of ABCA4-/-, viral vector gene therapy was used to increase expression in the RPE of complement receptor 1–like protein, which is a complement-negative regulatory protein. This resulted in reduced complement levels of C3/C3b in the RPE, along with a twofold reduction in bisretinoid accumulation compared with sham-injected ABCA4-/- mice. On histologic evaluation, there were 30% fewer lipofuscin granules and significantly more photoreceptor nuclei in the outer nuclear layer compared to sham-injected ABCA4-/- mice after 1 year.20 This study suggested that complement inhibition could be a feasible treatment option for preventing RPE and photoreceptor degeneration in STGD1.

Avacincaptad pegol (Zimura, Iveric Bio) is a C5 complement inhibitor that may prevent formation of MAC, consequently reducing cell death caused by destruction of the cell membrane. It is delivered by intravitreal injection and is being explored as a potential treatment option for STGD1 and AMD-related geographic atrophy. A phase 2b double-masked sham-controlled study (NCT03364153) has recruited 95 STGD1 patients and will follow them for 18 months. The primary endpoint of the study is mean rate of change of the area of ellipsoid zone defects as measured by spectral-domain OCT.

The ABCA4 gene (6.8 kb) exceeds the 4.5 to 5.0 kb capacity of the adeno-associated virus (AAV) vector, so equine infectious anemia lentivirus (EIAV) has been used for gene transfer. Subretinal injection of EIAV-ABCA4 was found to be effective in a knockout ABCA4 -/- mouse model in which treated eyes had a significant reduction of A2E concentrations compared with untreated and mock-treated (EIAV-null vector) control eyes.21

Sanofi is enrolling 41 patients with STGD1 in an escalating-dose phase 1/2 clinical trial evaluating SAR422459, formerly known as StarGen (NCT01367444). The trial will investigate safety and preliminary signs of efficacy over a 48-week follow-up period and is expected to be completed this summer. Another study (NCT01736592) is assessing long-term safety and tolerability of the treatment in patients in the original SAR422459 trial. Patients in this trial will be followed without further intervention for 15 years.

Another approach to addressing the large size of the ABCA4 gene is to split the gene across two AAV vectors. Inside the host cell, the two transgene fragments combine to generate the ABCA4 gene. Preclinical work in an ABCA4 knockout mouse model has been presented, showing that dual AAV vectors can be used to deliver ABCA4 gene, which in turn expresses protein and has an effect on lipofuscin/A2E accumulation.22

An alternative to viral vector delivery for gene therapy is nanoparticle technology, which can accommodate large genes such as ABCA4 for injection into the subretinal space. In a STGD1 mouse model, eyes that were injected with subretinal ABCA4 nanoparticles were found to have ABCA4 transgene expression that peaked at 2 months and lasted for up to 8 months. The eyes showed reduced lipofuscin granules on histopathologic evaluation and improvement of dark-adaptation recovery on ERG.23

Another strategy involves the use of oligonucleotides to address common splice defects in the ABCA4 gene. Antisense oligonucleotides can restore ABCA4 splicing defects caused by deep intronic mutations associated with STGD1.24 Given that the effect is not long-lasting, quarterly treatments via intravitreal injections have been proposed. ProQR is developing an antisense oligonucleotide that addresses a common intronic mutation that causes an aberrant splice site which, in turn, leads to exclusion of exon 39.25 This approach has been validated by ProQR in Leber congenital amaurosis, with promising results seen in a phase1/2 trial.

Given that RPE cell dysfunction is thought to play a major role in the pathogenesis of STGD1, stem cell therapy has been explored as an option to rejuvenate or replace damaged RPE cells. Stem cells can be derived from human embryonic stem cells (hESCs), induced pluripotent stem cells, or adult stem cells. hESCs can divide and differentiate into a variety of cell types. Induced pluripotent stem cells can be derived from a previously differentiated cell source, and use of this route may negate both ethical controversy and immunologic issues associated with hESC-based therapies.

The eye is an ideal candidate for stem cell therapy research for three reasons: The clear ocular media allow direct visualization of transplanted cells, the eye is a relatively immune-privileged site, and the eye requires smaller quantities of therapeutic tissue compared with other organs. Preclinical studies of hESC-derived RPE cells transplanted into the subretinal space of mouse models of retinal degeneration have been well tolerated, and the cells sustained visual function and photoreceptor integrity in a dose-dependent fashion.26,27

Given the success of preclinical studies, phase 1/2 clinical trials have been designed to test safety and preliminary signs of efficacy of subretinal transplantation of hESC-derived RPE cells in patients with STGD1 and AMD (NCT01345006 and NCT02445612). All patients in the trials had baseline VA of 20/200 to hand motions. In nine patients with atrophic AMD and nine with STGD1 who were treated with hESC-derived stem cells, no signs of acute rejection were noted after surgery. The 3-year results supported continued safety of the hESC-RPE transplantation. The patients with STGD1 gained a mean 4.1 ETDRS letters in the treated eye and 3.3 letters in the untreated eye at 3 years’ follow-up (5.8 and 4.0 letters, respectively, when visually significant cataract was excluded).28,29 Further studies will explore the safety and efficacy of hESC-derived RPE cells using an updated cell line compliant with current guidelines.

Although there are no commercially available treatments for STGD1, there are several categories of therapeutics under investigation to potentially fulfill this unmet need. With continued rapid therapeutic innovation, the future for patients with this disorder is hopeful.

Inherited Retinal Diseases for the Retina Specialist: Where to Start

Going Beyond the Classroom

Sustained-Release Devices for the Treatment of Chronic Eye Diseases

Supported through an educational grant by Allergan and EyePoint Pharmaceuticals.

AREDS Formulation: What We Know Now