Management of Retinal Detachment Due to Giant Retinal Tear

Retinal detachment repair is a mainstay of what we do as retina surgeons, and such repairs generally have good surgical outcomes. Retinal detachments associated with giant retinal tears (GRTs), however, are more challenging. This is for several reasons: They are relatively uncommon, there is no single best way to manage these eyes, and they can develop certain postoperative complications that can be challenging to manage and are best avoided.

A 58-year-old phakic man presented with a 2-week history of flashes and floaters and a 4-day history of progressive vision loss in the right eye. The other eye was unaffected. He had moderate myopia with no other personal or family ocular history, and he reported no ocular trauma. On examination, he had counting fingers VA with a mild nuclear cataract. 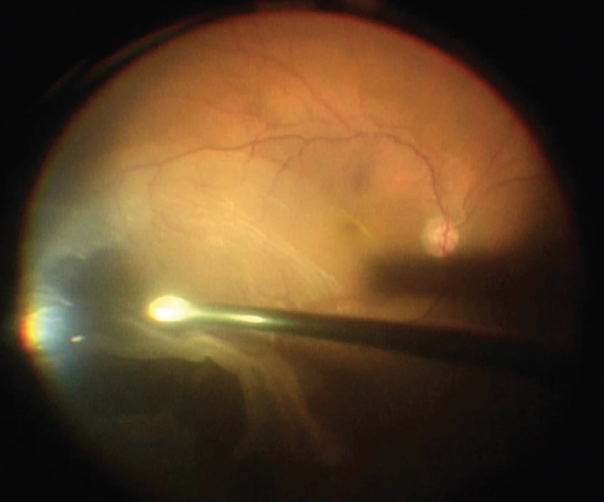 Figure 1. This patient had a superotemporal GRT with a macula-off detachment.

After discussion, the patient elected to undergo surgical repair with 23-gauge vitrectomy with scleral buckling. I use the Stellaris Elite (Bausch + Lomb) in the OR. The platform’s dual-blade cutters enable me to remove vitreous efficiently and with control even in areas with mobile retina.

Intraocular triamcinolone was used to highlight the vitreous gel and to facilitate trimming of the vitreous skirt. Perfluorocarbon liquid (PFCL) was used both to express the subretinal fluid anteriorly and to stabilize the peripheral retina to enable more complete removal of the vitreous.

Three rows of near confluent laser retinopexy were placed around the detachment and taken to the ora serrata. An air-fluid exchange was performed, with care taken to drain the subretinal fluid through the retinal break. Several drops of balanced salt solution were placed on the surface of the retina and evacuated prior to instillation of 14% C3F8 gas.

Several aspects of this case are worthy of mention, and some are matters of debate.

No. 1. Role of the Scleral Buckle

For GRT-associated detachments in phakic eyes, I tend to place an encircling band around the eye, particularly if the detachment is less than approximately 4 clock hours. I have seen a few eyes with GRT-associated detachments that extended 270˚ or more. In these instances, the patient has effectively created his or her own relaxing retinectomy, so I do not find scleral buckle to be very helpful. But in GRTs that are 1 quadrant in size, I do find it helpful; my colleagues and I have published results from a consecutive case series that provides data on this matter. This approach is by and large also useful for pseudophakic detachments; however, I will occasionally perform a vitrectomy alone on a pseudophakic detachment with good results, even with a relatively small GRT.1-3

With few exceptions, PFCL is helpful (and I would say mandatory) for essentially all GRT-related detachments. I place PFCL over the attached retina with the goal of flatting the retina from the area that is attached into the detached retina, uniformly smoothing the macula out along the way. If the retina is totally detached, I rotate the eye nasally and instill PFCL on the nasal aspect of the disc so that it smooths out the papillomacular bundle first. After PFCL is placed, I perform additional vitrectomy and laser. 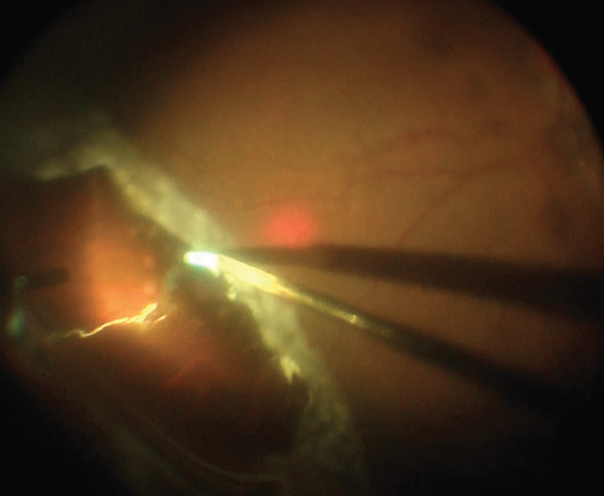 Figure 2. When subretinal fluid is to be drained, the break is rotated to the lowest position possible, the air infusion is turned on, and the air-fluid interface is drained for approximately 5 minutes. This helps to prevent postoperative slippage.

After this step, in order to remove the subretinal fluid, I rotate the eye so that the break is at the most dependent position of the eye. I then hold my extrusion cannula at the fluid-PFCL interface over bare retinal pigment epithelium, and I stay at this location for 5 minutes (Figure 2). I’m pretty adamant about that 5 minutes. When I’m in the OR, I will either look at the clock and time it or wait for two songs to go by. (If “Stairway to Heaven” is just starting, I’m usually better off looking at the clock.)

There’s a reason for the 5 minutes: It takes a while for the fluid that was displaced anteriorly by the PFCL to come around to the dependent position. It’s much like when you’re drinking a bottle of your favorite beverage. Eventually the bottle is empty, and you put it down on the table. If you go back to the bottle a few minutes later, you’ll notice that whatever residual liquid was left in the bottle has coalesced, and you may be lucky enough to get another splash of something tasty. A similar thing happens here.

Some surgeons routinely perform 360° endolaser, but others treat only the pathology. In our study, we did not find a difference in surgical success between the two groups.1 As such, I tend to treat only focal pathology, but if an area has lattice degeneration or looks atypical, I do not hesitate to apply laser judiciously.1

I use either a long-acting gas or silicone oil for tamponade. In our study, we found that surgeries in which SF6 was used had a lower success rate than those with C3F8 or oil.1 Compared with oil, long-acting gas can be a good choice, particularly if patient positioning is feasible. There is not much downside risk to using silicone oil, except the need to bring the patient back to the OR.4,5

Postoperative positioning can be challenging for patients after GRT repair. Ultimately, the concern about removing as much of the subretinal fluid as possible and positioning the patient appropriately centers around the risk of slippage. It doesn’t take much fluid underneath the retina for the retina to act like a Slip ‘N Slide (Wham-O) against the retinal pigment epithelium. Even when the retina interface is dried as well as possible, there is always some fluid left behind.

Ideally, we would Velcro (Velcro) that patient to the ceiling for a few days so that he or she is perfectly facedown with eyes toward the center of the earth. But for a number of patients, this isn’t feasible.

For the first 24 hours after surgery, if diligent facedown positioning is not achievable, I often ask patients to lie on their side with the operated eye toward the pillow. This allows the retina to drape itself toward the ground, smoothing out the macula and reducing the chance that a retinal fold will develop—the ultimate worry with slippage. After 24 hours, I tell patients they can resume whatever positioning is ideal for them. (This technique was shared with me by Cynthia Toth, MD).

Despite our best efforts, some patients develop a retinal fold. When this happens in the midperiphery, it’s not a big deal, but if it happens in the macula, it must be managed surgically. A number of strategies have been described for folds in the macula. When I take patients back to the OR for this, I peel the internal limiting membrane.

My colleague Jason Hsu, MD, and former fellow Andre Witkin, MD, have presented an elegant technique in which they managed this situation by using a 41-gauge cannula to create a neurosensory detachment in the macula, put a new gas bubble in the eye, and had the patient maintain appropriate positioning. This removed the retinal fold effectively.6

If you find yourself in this situation, don’t sit on it too long because it becomes harder to manage and to recover vision.

No. 7. Prophylactic Laser to the Fellow Eye

Other recent studies have also suggested that there is some benefit to prophylactic laser to the fellow eye.7,8 Overall, however, the data are not very strong. Do what you feel like doing.

A few points to remember:

I hope some of the strategies discussed here will help you manage this condition and make these potentially challenging surgeries easier.

My Switch to New Needles for Intravitreal Injection