PDT for Circumscribed Choroidal Hemangioma: Does It Work?

Data on outcomes by treatment method in patients with CCH reveal the answer.

Circumscribed choroidal hemangioma (CCH) is a benign vascular tumor composed of endothelium-lined vascular channels. CCH typically occurs in the macular, perimacular, or peripapillary regions.1,2 This tumor classically appears as an orange-colored mass and can have associated subretinal fluid (SRF) or overlying cystoid macular edema (CME), either of which can lead to decreased vision.

Management of CCH depends, to some degree, on tumor size; location, presence, and amount of SRF or CME; and visual symptoms.2 The primary goal of most therapies is to reduce leakage of CCH; the secondary goal is to induce fibrosis and regression of the mass.

Over the years, treatment options have included laser photocoagulation, external beam radiotherapy, plaque radiotherapy, proton beam radiotherapy, transpupillary thermotherapy, and, most recently, photodynamic therapy (PDT).3-5 PDT has been a major breakthrough in the management of CCH, as it resolves both subretinal and intraretinal fluid and causes minimal side effects.6 In this article, we present a case report and review the literature that illustrates the profound efficacy of PDT in the treatment of CCH.

A 48-year-old white woman presented with a 2-week history of blurred vision in the left eye (OS) and was found to have an intraocular mass, prompting referral to the Ocular Oncology Service at Wills Eye Hospital for further evaluation and management. She reported no prior ocular problems, and her medical history was essentially negative. 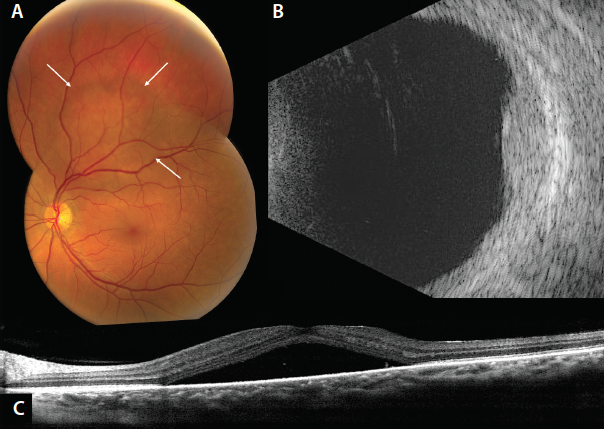 Figure 1. Circumscribed choroidal hemangioma (A, arrows) located superior to the macula with an echodense dome shape on B-scan ultrasonography measuring 4.3 mm in thickness (B) and subfoveal fluid on OCT (C). VA is 20/40.

On examination, her BCVA was 20/20 in the right eye (OD) and 20/40 OS. Anterior segment examination of each eye was unremarkable. Fundoscopy appeared normal OD; however, a circumscribed orange-colored choroidal mass with SRF extending into the foveal region was observed OS (Figure 1A). The tumor was located superotemporally and measured 7 mm in diameter and 4.3 mm in thickness. Ultrasonography revealed an echodense choroidal mass with no extrascleral component (Figure 1B), and OCT confirmed subfoveal fluid (Figure 1C), consistent with CCH.

Management with standard-fluence PDT was provided. A single intravenous dose of verteporfin (Visudyne, Bausch + Lomb) 6 mg/m2 was infused for a duration of 10 minutes followed by application of 689 nm diode laser directed at the tumor (spot size 7 mm) at an irradiance of 600 mW/cm2 over 83 seconds (50 J/cm2). 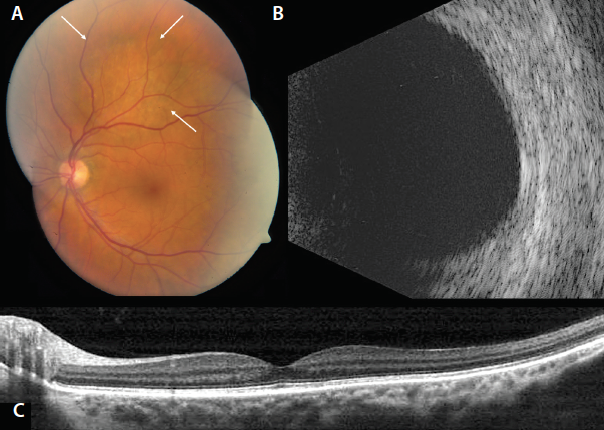 Figure 2. One year after treatment with single session PDT, the hemangioma (A, arrows) showed thickness reduction to 1.5 mm (B) and complete resolution of subfoveal fluid (C). VA is 20/20. 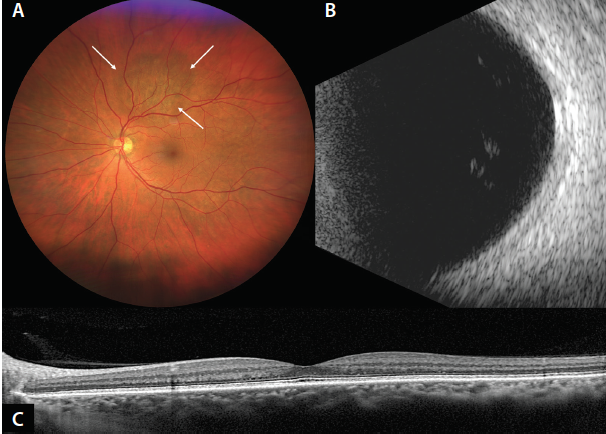 Figure 3. Five years after treatment with a single session of PDT, the hemangioma (A, arrows) remained regressed, with a flat scar on ultrasonography (B) and no subretinal fluid on OCT (C). VA is 20/20.

CCH occurs sporadically and is not associated with systemic disease.2 Genetic testing of patients with diffuse choroidal hemangioma and CCH in a study by Francis et al revealed new genetic information.7 The investigators found somatic GNAQ mutation (Q209 codon) in 100% of the patients with CCH, whereas one patient with diffuse choroidal hemangioma was found to have GNAQ mutation (R183 codon). Remarkably, this study also found that, when it is present in an endothelial cell, the GNAQ (Q209 codon) mutation could lead to CCH, but a similar mutation present in a melanocyte could lead to choroidal nevus/melanoma.7

Most clinicians have been taught that CCH is a unifocal, unilateral disease. However, Sobol et al recently found that CCH can in fact be a bilateral process.8 Using enhanced depth imaging spectral-domain OCT to measure subfoveal choroidal thickness (SFCT), Sobol et al found that the mean SFCT in fellow eyes of patients with CCH was 361.2 μm compared with a mean SFCT of 252 μm in a control group matched for age and gender (P < .0001). The study also found that choroidal architecture was disorganized in the fellow eyes of 42% of patients with CCH compared with 3% of patients in the control group (P < .0001).8 Based on these findings, increased SFCT may be a predisposing factor to development of CCH.

Management of CCH has evolved over time.3-5 Successful treatment of CCH with photocoagulation has been reported; however, in 64 eyes treated using photocoagulation, subsequent reaccumulation of SRF was observed in 40%.9 Naseripour et al investigated the efficacy of ruthenium-106 plaque radiotherapy for the treatment of CCH in 21 eyes.4 This treatment method controlled the tumor in 100% of eyes.4 However, radiation retinopathy (24%), radiation-related papillopathy (5%), and subretinal fibrosis (10%) led to a final mean VA of 20/40.

Another treatment option is transpupillary thermotherapy. In a study evaluating treatment outcomes in 38 eyes with CCH treated using this method, complete tumor regression was achieved in 16 (42%), and partial tumor regression was achieved in 20 (53%). However, complications of retinal and retinal pigment epithelial alterations, as well as retinal vascular obstruction, were observed.5

At this time, PDT is the most effective primary choice for the treatment of CCH. Early reports on PDT for CCH showed that VA improved in most patients treated using this method. Jurklies et al studied 19 patients with CCH who were treated with PDT.3 They found that the median VA following treatment was 20/40, VA improved by at least 1 Snellen line in 74% of eyes, and complete resolution of subretinal exudation occurred in 95% of eyes.3 Papastefanou et al compared lens-sparing external beam radiotherapy and plaque radiotherapy with PDT in 42 patients. No difference in tumor thickness decrease or in VA gain was found between external beam radiotherapy and PDT. However, a decrease in VA was noted in all eyes treated with plaque radiotherapy.1

In summary, PDT is an effective therapy for symptomatic CCH. The case described above illustrates the potential for some patients with CCH, if the disease is caught early enough, to regain VA to 20/20. Patients with CCH who were treated in the pre-PDT era, as evident in the data reported in studies published before the use of PDT, had generally poor VA outcomes (< 20/200), whereas patients treated with PDT have demonstrated a mean VA outcome of 20/63.2,10 So, to answer the question posed in the title of this article, yes, PDT is an effective treatment for CCH.

Support provided in part by the Eye Tumor Research Foundation, Philadelphia, PA (CLS). The funders had no role in the design and conduct of the study, in the collection, analysis, and interpretation of the data, or in the preparation, review or approval of the manuscript. Carol L. Shields, MD, has had full access to all the data in the study and takes responsibility for the integrity of the data and the accuracy of the data analysis.

Business Matters: From Manager to Leader