Repair of a Redetachment After Traumatic Giant Retinal Tear

Membrane removal following redetachment is common, and 3D visualization may be helpful.

The Constellation Vision System (Alcon) for microincisional vitrectomy surgery coupled with the Ngenuity 3D Visualization System (Alcon) can provide significant advantages in complicated retinal detachment repair procedures. The 3D visualization system is particularly useful in cases in which there is significant peripheral pathology, where it is important to have enhanced depth of field, and where the view of membranes over and under the retina can be enhanced with the use of filters. These advantages are saliently demonstrated in this case report of repair of a traumatic giant retinal tear (GRT) with proliferative vitreoretinopathy (PVR), subretinal hemorrhage and membranes, and residual crystalline lens remnants.

A 76-year-old man experienced blunt trauma to his left eye that resulted in a 50% hyphema, a dislocated cataractous crystalline lens, total retinal detachment with GRT, and massive subretinal and vitreous hemorrhage with PVR (Figure 1). VA in the left eye was light perception. 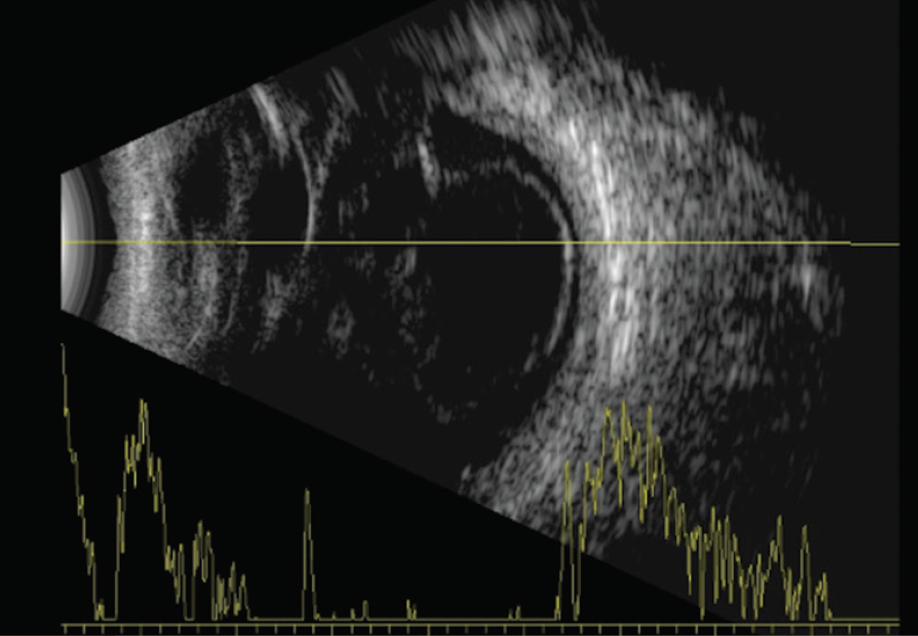 The patient underwent an anterior chamber lavage, pars plana vitrectomy with lensectomy, and reattachment of the retina under silicone oil. Six weeks after the initial surgery, the retina redetached under oil with formation of subretinal membranes and PVR.

In surgery to address the redetachment, we performed 25-gauge pars plana vitrectomy with silicone oil removal and removal of epiretinal membranes (ERMs) using enhanced membrane viewing with blue- and red-free filters on the Ngenuity system.

There was significant contraction and pulling of the retina toward the superior temporal periphery. Visualization of this area with the 3D system allowed me to free the retinal adhesions and release the traction. Many pigmented subretinal membranes were present, and aspiration with the vitrectomy probe was used to separate and peel the membranes from the subretinal space. The vitrectomy probe was also used to aspirate subretinal hemorrhage under the posterior pole and remove crystalline lens remnants. The light pipe was used to apply countertraction to the mobile retina during the subretinal membrane removal maneuvers.

After all of the subretinal membranes and ERMs were removed and the retina regained total mobility, perfluorocarbon liquid (PFCL) was injected with a coaxial Dual Bore cannula (MedOne) to flatten the retina atraumatically. The dual-bore cannula allows the user to inject PFCL from a lateral port while at the same time allowing passive fluid egress of fluid. This avoids causing trauma to the retina from the jet stream of the injection while maintaining a stable IOP.

Aspiration was done with a soft-tip needle and active aspiration. This procedure is possible with the Constellation platform because it allows simultaneous injection of viscous fluid and active aspiration. Finally, the sclerotomies were sutured with polyglactin 7-0 sutures to prevent subconjunctival migration of silicone oil.

The patient has been followed for 4 months, and the retina has remained attached with a BCVA of 20/400 and IOP of 12 mm Hg (Figure 2). No reproliferation of membranes has occurred, and silicone oil has not migrated into the anterior chamber. Silicone oil removal is anticipated in the coming months. 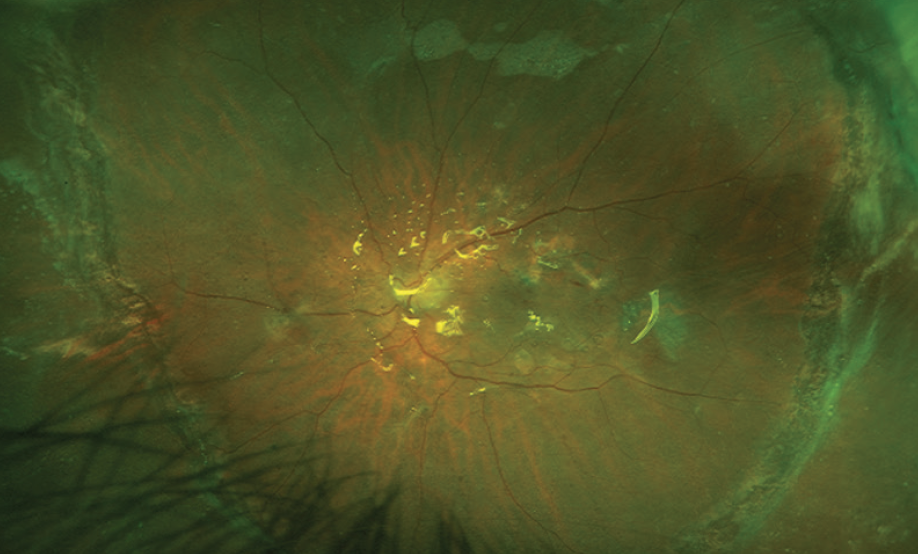 Figure 2. Widefield color photograph shows the retina attached under silicone oil with laser scars on the edges of the giant retinal tear.

In eyes with trauma resulting in significant hemorrhage and large tears with retinal detachment, PVR and membrane formation are common occurrences in the postoperative period. Visualization of membranes on the surface of the retina can be difficult, particularly if media opacities are present in the cornea or lens.

Staining with trypan blue can be used to enhance visualization of ERMs, but the color filters of the Ngenuity 3D system, along with the ability to manipulate the levels of light and the aperture of the camera, provide enhanced viewing of these membranes and preclude the need for dyes.

Subretinal membranes can be adherent to the underside of the retina and to the retinal pigment epithelium. Often they are friable and firmly adherent, and when forceps removal is attempted they can break into pieces and inadvertent tears can occur. Using aspiration on the vitrectomy probe, the surgeon can separate and remove these membranes with a combination of cutting and aspirating. The probe can also be used to separate attachments of the peripheral retina that are causing traction, as demonstrated in the Video.

One of the hazards of GRT repair is the occurrence of slippage of the retina during air-fluid exchange, with resultant retinal folds. This occurs when a layer of fluid remains under the retina or anterior to the PFCL. When a silicone oil tamponade is to be used, the best way to avoid this is to perform a direct silicone oil–PFCL exchange. The Constellation allows simultaneous injection of silicone oil and aspiration of fluid through the aspiration line. It is important to remove the fluid above the PFCL first. As soon as the oil reaches the interface of the PFCL, then aspiration of the PFCL over the optic nerve can be performed.

Because of the differing refractive indexes of silicone oil and PFCL, the interface between silicone oil and PFCL is clearly visible. This is most helpful in facilitating complete removal of the PFCL. Creation of an inferior PI is important to prevent oil from migrating into the anterior chamber and coming in contact with the corneal endothelium. Small PIs tend to close with fibrin, so a large one is preferred. 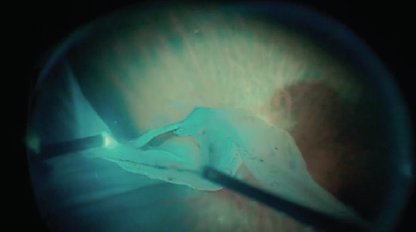 Three-dimensional visualization with the Ngenuity is particularly helpful in vitrectomy for retinal detachment. The Ngenuity provides higher magnification than an operating microscope, and this enhances the visualization of fine membranes and PVR. The enhanced depth of focus allows greater differentiation between tissues and helps avoid inadvertent trauma to the retina or retinal pigment epithelium.

The system also provides simultaneous crisp views of the optic nerve and the peripheral retina. This is important, particularly when we are removing membranes, when traction can be exerted distal to the area we are working on. Optimal visualization of the retina and vitreous at all levels within the eye is most useful in preventing iatrogenic breaks.

The combination of small-gauge vitrectomy and 3D visualization allows surgeons to use new maneuvers in the repair of complicated retinal pathologies. Enhanced viewing of structures, together with gentler, more precise removal of tissue, may streamline our surgical interventions, reduce the need for ancillary instrumentation, and optimize outcomes in complex cases.

Precision Engineering in a Vitrectomy Platform

Blast From the Past: The Rebirth of Dual-Bore Cannulas