Documenting the periphery is vital in many retinal pathologies.

The peripheral retina is commonly involved in retinal pathologies such as diabetic retinopathy, vein occlusions, retinal detachments, and uveitis. Ultra-widefield imaging is becoming an essential part of retinal assessment, as it facilitates screening and documentation of the retinal periphery.1 Devices that perform widefield imaging can capture images in a number of modalities, including color photography, fluorescein angiography (FA), ICG angiography (ICGA), and OCT. Our experience with one such device, the scanning laser ophthalmoscope (SLO) Mirante (Nidek), is detailed in this article.

The SLO-based Mirante provides multiple imaging modalities in one device: high-definition OCT and confocal SLO (cSLO), both with widefield capabilities; OCT angiography (OCTA); fundus photography, FA and ICGA; green and blue fundus autofluorescence; and retro modes. An optional advanced widefield (163° measured from the center of the eye) lens attachment is available for this device.

According to Nidek, the Mirante is the only device that includes four separate lasers, each of which penetrates to different depths: blue (480 nm, which is reflected by the nerve fiber layer), green (532 nm, reflected by the ganglion cell layer), red (670 nm, penetrates through the retina), and infrared (790 nm, penetrates through the choroidal layer). Each of the lasers can scan the retina through a confocal optical setup with a small coaxially placed pinhole that lets in only light coming from the focal planes, while blocking backscattered and out-of-focus light. The multiple lasers allow the Mirante to reproduce pseudocolor images that almost mimic the natural colors of the fundus.

The Mirante’s spectral-domain OCT (SD-OCT) captures 85,000 A-scans per second. It can obtain macula maps that include a 16.5-mm by 12-mm area, facilitating detailed assessment of a wide field from the vitreous to the choroid in a single shot. This is a wider OCT imaging field than is possible on other devices at 16.5 mm.

The capabilities of the Mirante make it useful in a number of scenarios. Here we present case examples in which we used one or more modalities for widefield imaging on the device.

A 36-year-old man presented for routine postoperative follow-up 3 months after pars plana vitrectomy with scleral buckle for a total retinal detachment. He had undergone encirclage with 25-gauge pars plana vitrectomy and silicone oil injection in the left eye (OS). His BCVA was 6/18 OS. Widefield fundus color photo montage showed a 360° buckle effect and a silicone oil reflex. The retina was well settled. Laser marks around the retinotomy site can be seen at 10 o’clock (Figure 1). 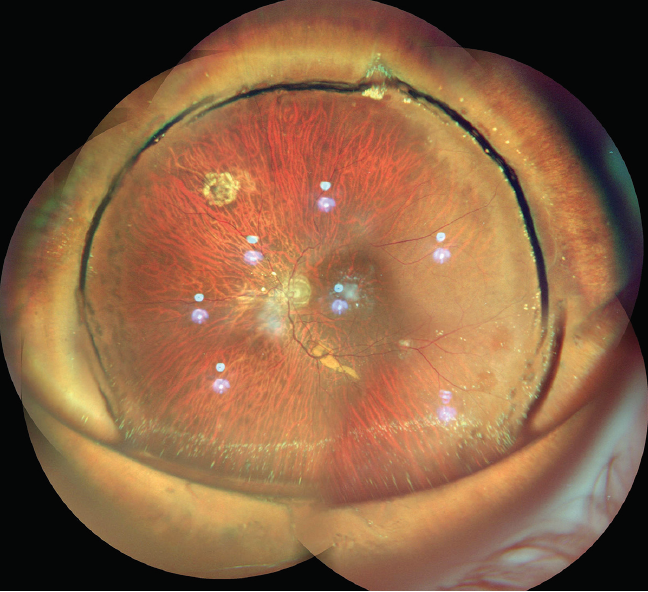 CASE NO. 2. REDETACHMENT IN A BUCKLED EYE 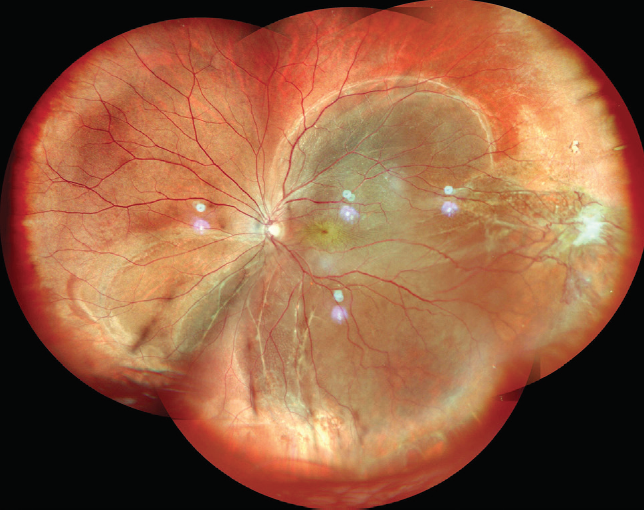 A 13-year-old girl presented for a routine follow-up. She had undergone chemotherapy plus laser ablation and cryotherapy for retinoblastoma 10 years ago. Widefield color fundus montage OS showed sclerosed vessels extending nasally from the disc (Figure 3). An elevated mass was seen in the nasal periphery with laser and cryo marks. The rest of the retina was normal with a good foveal reflex. No new lesions were seen. 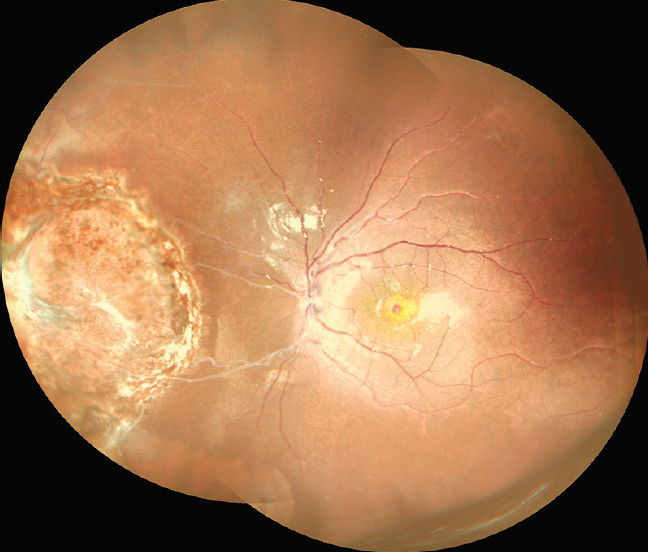 A 46-year-old man presented for a routine follow-up. BCVA in the right eye (OD) was 6/6. The patient was myopic and had used correction since childhood. He had undergone prophylactic laser barrage OD 5 years ago. Widefield fundus photograph showed a myopic fundus with tessellated background (Figure 4). A large disc with peripapillary atrophy was noted, along with pigmentary alterations at the macula. A well-barraged horseshoe tear can be seen at 2:30 o’clock. 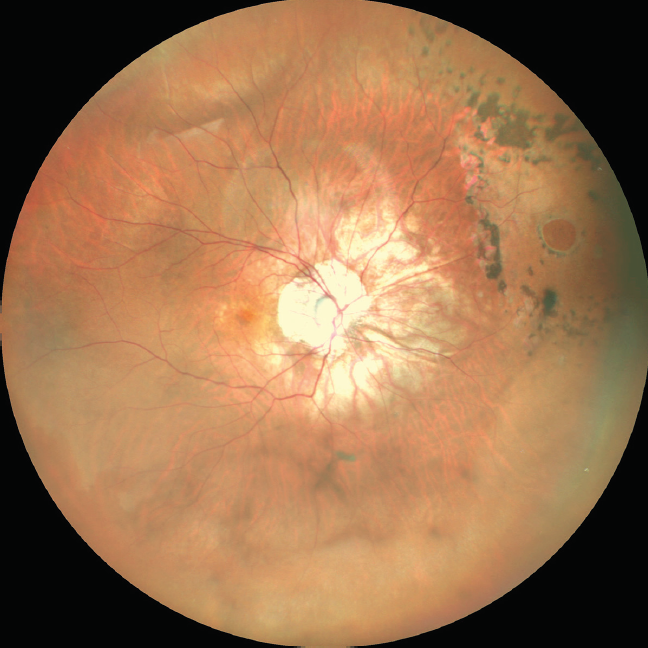 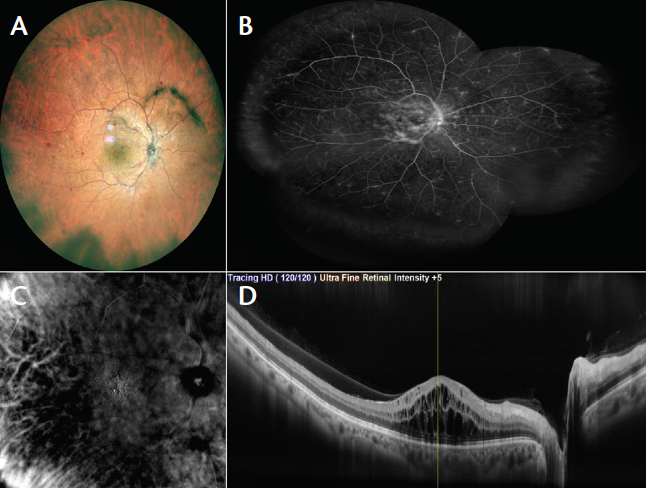 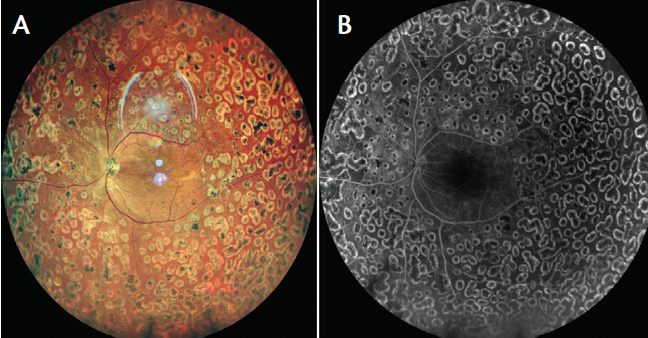 A 60-year-old hypertensive woman presented with complaints of floaters and decreased vision OS for the past 10 days. Her BCVA OS was 6/12. Fundus examination revealed disc edema with vitritis and scattered multiple hypopigmented subretinal lesions (Figure 7A). On widefield ICGA, multiple hypofluorescent lesions in the posterior pole corresponded to the clinical picture (Figure 7B). These spots remained hypofluorescent thorough the mid and late phases (Figure 7C, D), indicating active lesions. 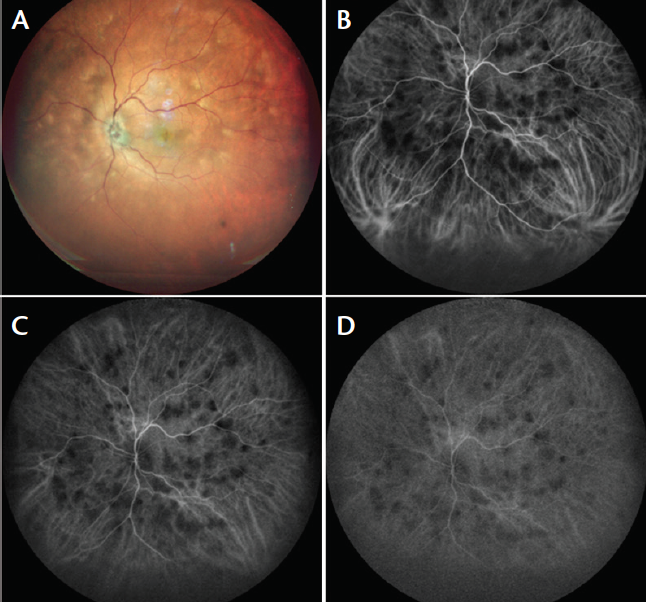 A 32-year-old man had decreased vision in both eyes for the past 7 days. His BCVA was 6/36 in both eyes. Fundus examination showed vitritis OD and disc edema with subretinal fluid pockets in all quadrants (Figure 8A). Widefield FA montage revealed an altered FAZ with a hot disc along with extensive peripheral leakage visible in late phase. Multifocal areas of pinpoint leakage are seen (Figure 8B).

Peripheral leakage is a finding often missed during routine imaging when treating patients with Vogt-Koyanagi-Harada disease. It can be used to measure treatment success and may inform the decision to taper a patient off of steroids.

Ultra-widefield imaging helps us to document peripheral pathologies such as horseshoe tears and lattice degenerations as well as tumors such as retinoblastoma. In cases with vascular involvement (eg, diabetic retinopathy and retinal vein occlusions), ultra-widefield imaging helps capture areas of neovascularization and capillary dropout in the extreme periphery. Often, these observations would have been missed during routine imaging of central fields.

Ultra-widefield multimodal imaging is an important clinical and research tool. By combining images from different modalities, clinicians can develop a detailed understanding of functional and morphologic aspects of various retinal diseases.